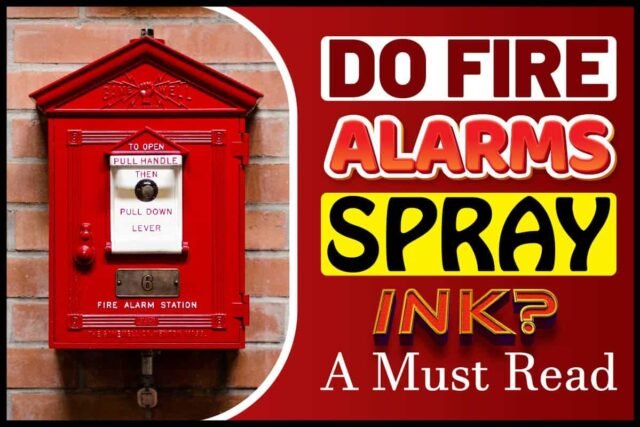 No one can predict when danger would occur. However, one can take necessary precautions to safeguard life and property.

This possibility necessitates the allowance for contingencies or preparation for impending danger.

Fire, although necessary, can be destructive when it comes unexpected or it goes out of control.

Countless accidents have occurred by fire. Proper management has brought some fire outbreaks under control.

A fire alarm is a signal or sound that warns people about a fire. When there is smoke, fire, or carbon monoxide in a building, the alarm blares to warn people.

Fire alarms do not spray ink. The idea is an old-school myth—the myth existed to deter pranksters from setting off false fire alarms.

Young chaps do this to fulfill prank obligations with their friends. They might also do this because they merely want to skip a class. Some want to see the school in an uproar. Others want to have fun.

In some instances, someone might be up to something sinister in their residential building. So, they do this to get people off the building.

If fire alarms don’t spray ink, what do they do, and how do they work?

How Does The Fire Alarm Work?

Fire alarms serve as a warning of an impending fire outbreak.

Fire alarms detect a fire or the slightest possibility of a fire outbreak.

Fire alarms are a part of a fire alarm system. These systems are in-built in residential, commercial, or industrial premises.

The alarms can give a warning signal in the event of a fire. This signal may be a siren or loud ringing sounds in a building.

The fire control unit of the building receives the sound. This unit then alerts the fire service should there be a need to put out a fire.

Also, if the alarm goes off and the call is genuine, residents inside the building will need evacuation.

Fire alarms can set off manually or automatically. In the former case, an external force acts on the alarm control to set it off. You can get this done by simply pulling the switch.

In the latter case, the control of the alarm ensures that it sets off once an incident is detected. Either way, necessary measures are taken for evacuation and alerting the relevant authorities.

Fire alarms can set off due to various reasons. The reasons include; smoke getting into the detector, air freshener irritation, etc. There can also be accidental or intentional reasons.

Tipping over the alarm.

The sound given off by a fire alarm is somewhat regulated. The severity of the detected signal determines the level of regulation.

The sound levels could be low, medium, and high tones, depending on what is detected.

Note that older models of fire alarms have dye or ink included in the alarm control box.

You can identify anyone who falsely offsets the alarm since the ink or dye would leave a stain on the hand. This stain could stay as long as forty-eight hours. The purpose of the technique is to ward against false alarms.

Follow in the subsequent paragraphs to be further enlightened on fire alarms.

Fire alarms vary based on how they detect fire. There are two classes of fire alarms. They are smoke and heat detectors.

The smoke detectors are;

Optical detectors are best for detecting the subtlest possibility of a fire. They can sense a fire as early as the smoldering stage.

They use infrared LED (light-emitting diode) light beams to detect smoke in an area. The optical detectors are costlier to install than the ionization smoke detectors.

The heat detectors do not detect smoke but temperature changes—the track variations in temperature, low, high, or moderate.

They are much better at combating false alarms but detect a fire much longer than a smoke detector would.

This type of alarm is better suited for locations in a building where the smoke detectors would give off a false alarm. Such places include dust and fire-prone areas, like the kitchen.

The main components of a modern fire alarm system include the control panel and the power supply unit.

This part act like the brain box of the system. The control panel monitors the integrity of the system. It relays information and controls input and output.

This includes both the primary and the secondary power supply.

The primary supply is usually a 120 or 240V AC source gotten from a commercial utility.

The secondary supply is usually a DC source. The power supply source could be a battery or an emergency source such as a generator.

Other components include the notification appliance, the building safety interface, and initiating devices.

Imagine yourself in a world where we must wait for someone to detect a fire before others get to know.

Well, that’s how the world was before the invention of fire alarms. The mode of operation for putting out or controlling fire was limited to early detection by a person. But with the advent of the fire alarm, fire detection and control became more efficient.

Dr. William F. Channing and Moses Farmer invented the first non-human fire alarm in 1852. Since that time, it has taken different forms and designs.

The fire alarm system mimicked using the complexity of the human nerves and the brain. The nerves convey messages to the brain signaling an impending danger. The brain moves to action to mitigate that danger.

They were too large and could hardly fit into residential buildings. Simply put, their build did not consider space management.

In recent times, fire alarms occupy a nearly insignificant space in a building. However, they cover a wide range. They are also more effective and efficient compared to earlier models.

Early versions of fire alarms had only manual operation. With the advent of electricity, there have been significant improvements. Automatic fire alarms have now emerged.

You cannot understate the benefits of fire alarms. Many lives and properties have been salvaged, especially in modern times.

Early detection of fire necessitates a swift response. There has been a growing case with this based on the improvements on the alarm systems over the years.

All inventions have limitations. There are some shortcomings associated with firm alarms.

Below are some limitations.

Fire alarms do not spray ink. If they are older models, they merely leave the offsetter with a stained hand as proof.

Fire alarms are an indirect means of curbing or controlling a fire. They are of different types and operate in various ways.

Their mode of operation depends on the design. However, the goal remains the same.

In recent times, most fire alarms have automation features. They use electricity or batteries as power sources.

There are two broad divisions of fire alarms which are; smoke detectors or heat detectors. The choice of which fire alarm best suits a location is dependent on the peculiarities of that location.

In this case, you should install a heat detector in a kitchen. A smoke detector would be more appropriate in a bedroom of the same apartment.

Another salient thing to note when deciding on the appropriate fire alarm is the financial implication.

So there you have it! Do not bother yourself with getting sprayed by ink since fire alarms don’t spray ink.

What Is The Difference Between Chidori And Lightning Blade?

What makes the anime Naruto stand out the most is the attention to detail that the producers have put into it.  We have been binge-watching...