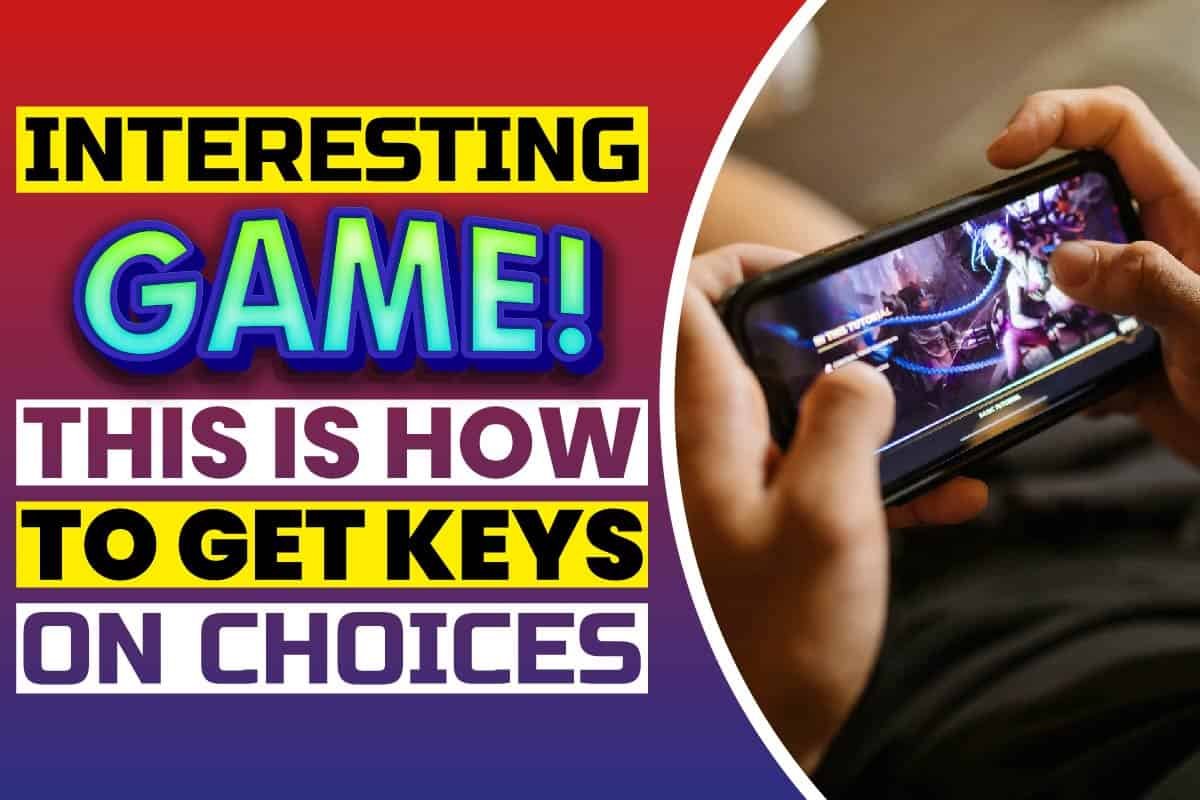 Choices are a role-playing mobile game series created by Pixelberry Studios. The game follows plots from visual novels that either come as standalone titles or in series.

When Choices was first released in 2016, it featured only three stories and genres. Initial genres included romance, mystery, and fantasy. The game currently has ninety-four stories, and more additions could be on their way.

Players require keys to progress in chapters. The game currently allows players to store a maximum of two keys. However, with a VIP subscription, you can store more keys.

Alright, let’s discuss crucial aspects of the game. Read on!

How To Get Keys On Choices

Some players have tried to download hacks to enable them to get game keys faster than normal.

However, there’s only one way to get keys on Choices: waiting for a minimum of three hours. You can also get the maximum number of free keys by playing the game often.

If you have only one key left when playing Choices, a timer begins to read automatically. The game stops when the timer reaches zero. You’ll have to wait for at least three hours to resume.

If you have a VIP subscription, you’ll probably have more game time before you run out of keys.

The game deploys different gameplay mechanics. These include the following:

Diamonds, also known as premium, are used to enhance dialogue, plot, and the visual aspects of characters.

You do not need diamond choices to finish storylines and complete basic goals. However, you require them to have a good level ending.

This feature is currently available on Most Wanted and The Crown and The Flame series.

It enables the player to collect skills, power, prestige, and legend points when correct choices are made. In place of diamonds, players can use these points when faced with hard decisions.

You cannot select the option without enough points, as it appears grayed-out in the game.

Your character’s relationship with others in the game can either improve or go downhill with the choices you make. Relationships are usually denoted by a heart sign for romance and a positive sign for relationships.

However, in some books, choices that boost relationships with some characters may decrease relationship points with others and vice versa.

When faced with this situation, players can structure their gameplay to choose between characters they want to win over and those they don’t want to.

Also, in most books, the choices you make are often remembered by other characters, affecting their dialogue and action towards you.

This impact is evident in chapter two of High School Story Book Two. If you choose to keep Koh’s secret even when under Isa, she’ll remember it, and Michael will reveal to you how much respect she has for you in chapter ten.

However, if you decide not to keep Koh’s secret, she will end up being rude towards you.

A timer appears next to the list of choices in cases of timed choices. A certain amount of time is allocated to players to make choices.

Choosing the right option yields a favorable outcome. The result is the opposite with a wrong decision. The best option in most cases is to allow the timer to run out.

Texting: Texting was first featured in the Chat series. Players can push the blue button-down and patiently wait for the circle to fill up to enable texts to flow automatically.

Although Choices initially began with three series, over two dozen series have now been released.

Some notable Choices series include:

Major Timelines In History Of Choices

Choice has evolved over the years. A look at the timeline illustrates how the game has developed since its inception in 2016.

August 17: Choices was launched, with first-time players receiving 50 instead of 25 diamonds as a reward.

April 14: Royal Romance Book 1 became the first book to be released on a Friday, ushering a new trend of Friday releases.

October 13: Pixelberry announced that it was creating a horror-themed book titled Live in the Woods.

October 26: The game producers released the soundtrack of It Lives in the Woods book.

November 8: My Books section, a feature where players can store and discard remove books, appeared in the game for the first time.

December 7: Pixelberry released the 100th chapter in the Choices game.

December 11: Work began on a new story titled Home for the Holidays.

April 9: The Junior Book 1 became the first book to be released on a Monday, ushering a new trend of Monday releases.

June 14:  America’s Most Eligible was scheduled for release.

July 9: The soundtrack of The Perfect Match series was released.

July 31 – August 9: A special diamond package was made available to Android users only with a similar feature promised to IOS users in the future.

August 21: It Lives book was scheduled for release in October.

September 11 – 12: A redesign in the thumbnails of all the Freshman books was done.

September 24: The official name and book cover of It Lives 2, along with its official release date, was announced.

November 1: The book cover for A Courtesan of Rome was unveiled, and the release date was announced.

December 5: The book cover for Desire and Decorum was unveiled, and the release date was announced.

December 11: The soundtrack of the Freshman series was released.

January 1: America’s Most Eligible: All-Stars was scheduled for release on January 16.

January 7: Ride or Die, a bad boy romance, was announced for release later in 2019.

January 14: High School Story (Class Act) was confirmed as a book series instead of the proposed standalone book.

February 7: A title was announced for an upcoming medical-based story – Open Heart and was placed under a gender of choice story.

March 4: Passport to Romance was scheduled for release in the spring of 2019.

March 6: Book cover for The Elementalist Book 2 was unveiled.

March 8: The soundtrack for the Elementalist series was released.

April 2: The trailer for Wishful Thinking was released, and the premiere date for announced.

April 15 – 26: The game currently allows players to store a maximum of two keys. However, players with a VIP subscription can store more keys.

May 2: Choices Sneak Peek got a new logo.

July 10: The book cover of Bachelorette Party was unveiled, and the premiere date was announced.

October 1: Bay Bump Book 1 was revealed as the title of an upcoming story.

December 21: The premiere date for Desire and Decorum: Winters Past was announced.

The story of your freshman year at Hartfield University – you’ll make new buddies and perhaps, find love. There, you’ll meet the bookworm James, the socialite Kaitlyn and the football star Chris. Who will you fancy?

The Crown & The Flame:

You’re now ready to launch an offensive into enemy territory to reclaim your stolen crown with a formidable army and special powers.

A strict Texas Marshall and a detective team up to find a killer in this story. Can you stop the killer from taking more lives?

Choices is a role-playing mobile game series created by Pixelberry Studios. It was launched in August 2016 with three chapters and three genres.

The game follows plots from visual novels that either come as standalone titles or in series.

Players require keys to progress in chapters. The game currently allows players to store a maximum of two keys, although VIP members can store more keys.

To get keys, you would have to wait for at least three hours after you exhaust your keys and play the game regularly from freebies.