What Is A Group Of Bats Called? Check This Out 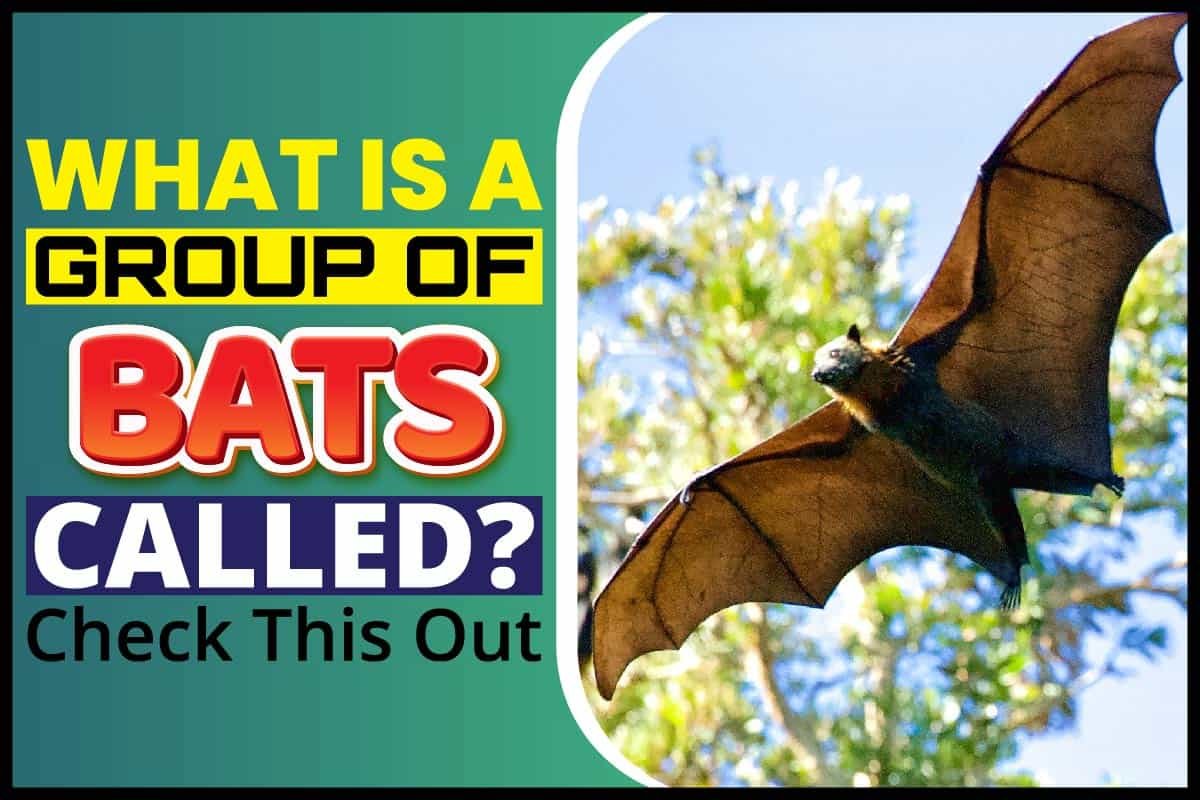 Most people feel uncomfortable whenever they come across bats. And it’s not their fault. Bats have been portrayed as deadly and evil flying creatures in movies and cartoons. They have even played vampire roles in movies.

But are bats vampires? No. However, different species of bats exist. The vampire bat also exists. But these bats reside in tropical areas. So, you have few chances of finding them around your house.

Interestingly, they do not prey on humans. There have been few reported cases regarding this, though. But then, it’s nothing to worry about.

However, these scary-looking winged creatures are kind of helpful in keeping pests and insects at bay. The insectivorous bats eat pests like mosquitoes, moths, beetles etc. And they’re the most common bats you’d see around.

Now let’s go back to the question.

What Is a group of bats called?

They call a group of bats a colony, camp, or cloud of bats. Most animals are known for moving in groups. Bats are a good example of such. They aim to socialize, hunt, and find shelter together.

Just like every other colony of animals, being in a group setting helps them watch against predators. You may rarely find a bat moving in solitary.

Read on for more information on this topic!

Are Bats Mammals Or Birds

At a glance, most people may classify bats as birds. Many would hinge their ability to fly for a good reason. But bats aren’t birds. Instead, they’re mammals. They are considered flying mammals.

Bats and birds share quite a lot of similar features. Surprisingly, there’s only a slight difference between the winged creatures.

A common difference between them is their reproductive features. Bats do not lay eggs like birds. Like other mammals, they give birth to their young alive. Birds are known to lay eggs.

Again, bats feed their young with milk. Birds, however, do not have mammary glands. So, they are unable to produce milk.

Another major difference is that birds have beaks but no teeth. But bats have jawbones with very sharp teeth.

An obvious similarity between them is their ability to fly. However, bats are regarded as webbed structured flying animals. Birds are called feathered, winged animals.

Also, both animals are warm-blooded. So, it means that they can maintain a constant body temperature.

Why Do Bats Hang Upside Down

Bats are the only flying creatures that hang upside down. This is quite a strange ability. However, it has very good reasons and advantages. At least to the bats, it does.

Firstly, bats hang upside down for protection. Their short legs make it difficult for them to take off from the ground. So they climb up to high and shady places and fall into flying when there’s danger.

Again, their wings are not strong like that of birds. So, it doesn’t produce enough lift for them to fly. Hanging upside down helps them take flight easier. It has a great advantage, especially when there is a threat.

Furthermore, bats are naturally formed to sleep upside down. Imagine yourself upside down for just a minute. Sooner than you know it, blood starts rushing to your head. And the muscles holding you up would start to strain. However, this is different for bats.

They find it easy to sleep upside down. Bats have what are called tendons. Now, these tendons are found in a bat’s talon. And it is attached to the upper bodies of bats. So, the weight of their upper bodies pulls their talons close. And this locks them in place.

With this, bats can stay upside down for as long as you can imagine. Studies have shown that a bat can die hanging upside down. And it could stay there long enough except something knocks it free.

Tips On How To Get Bats Out Of Your House

Finding a bat in the house can be a devastating situation for many. But if you find one flying around your house, don’t panic. There are ways to get bats off your house in peace. Additionally, know that the bat wants to get out more than you want it.

The chances are you want the bat out as soon as possible. However, do not let a bat out just immediately. First, be sure no one in the house is bitten by it. Bats are also known to scratch. So, you probably have to check that out as well.

If you find any bite or scratch, call your local animal control agency. You have to get the bat checked for rabies. But that would mean capturing the bat.

Now, you should be wondering how to capture a bat? Keep reading.

So, if you’re the bat hasn’t bitten anyone in the house, you may proceed to let it out. You can get a bat out of your apartment in two easy ways.

Let’s find out how.

The first is called the isolation method. This method is quite easy. But it requires a little bit of patience. To achieve success, follow the steps below;

First, close the doors that lead to other rooms in the house. You’ll need a flashlight for this method. That’s probably the only thing you’d need.

Now, open the doors and windows that lead outside. Next, make sure there are no objects in the way of the bat. If there are, then clear every obstacle. Make sure there’s nothing that may prevent the bat from flying.

Then, Turn off the lights in the room. The next thing is to flash your flashlight out an open door or window. Usually, the bat would find its way out. But it may take a little time. Most times, it may take the bat a long time to leave.

However, when the bat eventually leaves, close your doors and windows. That’s all about the isolation method.

However, most times, the bat may never fly out. That leads us to the second method, the trap-in method.

This is more like an alternative method. Just in case the first doesn’t work, this should. Again, this method is best if you have to capture a bat to get it tested. So, you’re going to capture the bat. There’s no need to panic; it is quite simple.

So for this method, you’d need the following materials;

So, with these items, you’ll be creating a trap box. You have to also get the bat inside the trap box. However, do not touch the bat with your bare hands. That’s pretty much why you need gloves.

Let’s proceed to how you can get this done.

First, using your scissors, create tiny holes around your box. This will enable the bat to breathe when captured. Then, place the t-shirt in the box.

This method requires a lot more patience than the first. You have to wait for the bat to land before you proceed. So ensure you’re very much alert.

Normally, bats will land where they can hang. It could be behind your curtain or hanging clothes. It’s rare to find a bat hiding underneath a bed.

It’s likely for bats to fly back and forth above the walls and center of your house. So, stay close to the wall. When it lands, approach it slowly. Have your box and cardboard with you.

Then, go ahead and place the box over the bat. Next, gently slide your piece of cardboard underneath the box. Then, gently turn your box over. Firmly hold the cardboard tightly over the box.

Now, use your tape to secure the cardboard to the box. Make sure the tape is not exposed to the bat.

Finally, go ahead and release the bat outdoors. Since bats have trouble flying from the ground, you could have to make flying easier for them.

Just look for an elevated area. Place the box above your head and tilt the box slightly. This would enable it to fly. Use your flashlight to watch it leave.

In most cases, the bat may still not fly even after your assistance. Possibly, the bat may be sick or injured. There’s a possibility that it’s a young bat wandering around.

Whatever happens, keep in mind that you have a bat that has challenges flying. In this case, put the bat back into the box. Remember to use your gloves. Please remember to keep it away from children and pets. Then call a wildlife rehabilitator close to you.

A group of bats is called a colony, camp, or cloud of bats. Bats move together, intending to socialize, hunt, find shelter and watch against predators.

Often, bats are fond of moving in groups. However, some move in solitary. Solitary bats include red bats, silver-haired bats and hoary bats.

Although bats are mammals, they share a lot of features with birds. Bats are the only flying creatures that sleep upside down. Hanging upside down helps them take flight easily when threatened.