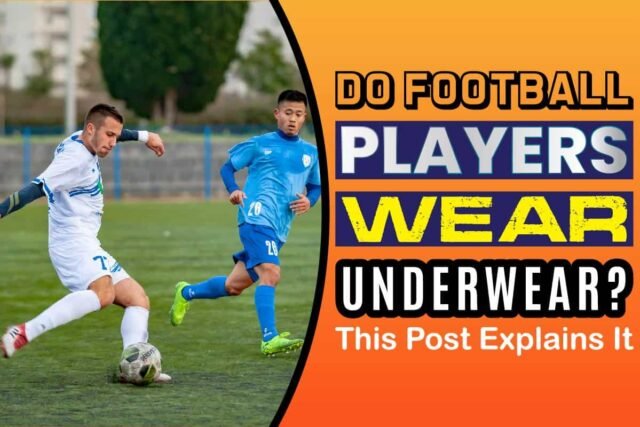 No laws make it compulsory for a football player to wear underwear. Even though it’s not a specified kit, it’s advisable to wear one during a game. Whether in NFL or international soccer, underwear is for modesty.

Underwear also gives a level of protection to the genitals. So it’s left to your discretion as a player to wear one or not.

Yes, they do. However, since it’s not compulsory, some players may decide not to. Every player’s primary aim is to be comfortable and completely protected while playing the game. It’s so because football is a sport that requires lots of contact and impact from other players.

Such contacts come with a force that can lead to injury, so the kits are mainly for protection. The groin also needs protection as much as other parts of your body. But the underwear has to be without discomfort for the player to be effective.

Keep reading for in-depth information on this topic.

What Kind Of Underwear Do Football Players Wear?

Some typical underwear for football players (NFL or Soccer) includes the following.

A plastic protects the groin. It ensures no direct contact comes to the private parts, just as the helmet protects the head. It’s for football players (not soccer).

The cap consists of hard plastic that lies on a spandex material or jockstrap. Its shape fits the male legs and holds the genitals comfortably.

However, over time most professional football players no longer wear cups. And it’s due to the discomfort most players feel as they get older, as the pants are tight, almost like a second skin. Hence, the cup may cause chafing at the inner thighs.

It’s easy to forgo wearing cups since they are not a compulsory kit for football. Some players also feel using cups hinders their performance and running strides.

The bras are not for the same purpose as the ones women wear but are like half tank tops. They hold the GPS tracker players wear. The trackers monitor their health and performance, such as the heart rate, speed, acceleration, distance, and speed.

Soccer teams initially used bras during training, but they now use bras during live matches since 2019. It enables the managers and coaches to monitor the players during live games. It also makes it easier to know when players burn out, including their physical state.

The trackers attached to the bras link to pods (on tripods) for monitoring during games. The signals that are from the trackers transmit the stats on the pods.

The data from the GPS trackers enable the coaches to decide when to replace players, advise players, make half-time decisions and even prevent injury.

However, such bras are getting popular with international football (soccer).

It consists of a stretchy material and holds the body tightly. It also ensures the body is warmer during training or matches and improves blood flow in the players. It’s known to reduce muscle fatigue, soreness and reduces risks for strain.

Compression shorts provide extra support for players’ groins. It also holds a cup in place. It’s also an excellent way to protect sensitive parts of your body as you play. It’s a mix of protection and comfort. It causes less friction during training and matches. So, it’s easier to perform activities without it riding up.

It’s also effective underwear for players with groin pain without reducing their performance.

It’s also known as an athletic supporter, and its original use was for cyclists. It consists of a front panel with two elastic straps that support the groin. Some jockstraps also have a pocket in which you can place a cup.

Furthermore, it offers great support without any tightening feeling on your legs. It also helps prevent the dangers of blunt trauma to delicate areas. Such incidence may result in internal bleeding or other serious complications.

Why Do International Football Players Have To Show Officials Their Underwear?

A series of events occur in the tunnel before the players enter the field for the soccer game. Such events leave most fans wondering what goes on in there. At times when you get a glimpse of what goes on there, you may become puzzled.

Before the players go into the field to start the game, the officials (referees) search them.

The search is from their boots and clothing to even their underwear. It’s quite surprising. But then, it may not be what you think.

The officials don’t search the players for exhibits or weapons. Instead, they check their boots to ensure the boots’ studs and soles are not harmful to the player or other players. And the same goes for the other clothing. However, they check the underwear to make sure it meets the recommended standards.

The body in charge of the soccer world cup (FIFA) recommends that players not use their underwear to display messages they disapprove of. As such, players wear underwear that matches the color of their teams’ kit.

The officials check to make sure the players adhere to the rules. Other member associations under FIFA also stick to it.

Some professional shorts have underwear attached. But most players prefer to wear the underwear they endorse. For instance, David Beckham wears Calvin Klein underwear, and C. Ronaldo wears CR7 underwear.

When a player gets found with mismatching underwear, he may be asked to change it before going into the field. However, when players default and go into the field with underwear that doesn’t match their shorts, they may receive penalties like fines.

An example of players that defaulted in the past is Nicklas Bendtner, who wore green underwear over his red team shorts during the Euro 2012. The underwear promotes a betting company (Paddy Power). Additionally, he received a fine of £80,000. But the company paid off the bill on his behalf.

However, you don’t wear some visors in a game. So, ensure your coach tells you the suitable types.

They protect the player’s head and face from injury. Some facemasks come attached to the helmets for extra protection. They protect you from head injuries, which may be fatal.

Sometimes, there are air pads in the inner part of the helmet for extra support and absorb the effect of an impact. But some helmets have pads with foam.

You can’t do without a mouthguard in a football game. It can be extremely risky to do so. It protects the lips, teeth, and gum. You can’t rely solely on a faceguard as it does not cover your mouth, as a mouth guard will.

The mouth guard helps prevent tongue injury, gum damage, broken teeth, and a fractured jaw. As such, you have to put it on at all times during the game.

They consist of thick padding with a plastic shell at the shoulder part of the jersey. They protect the shoulder.

However, the thickness of the shoulder pads depends on the position of the player on the field. For instance, a Quarterback needs a light shoulder pad because he needs to throw effectively.

Without them, players may experience sprains, fractures, dislocations, or contusions due to the intense impact on the shoulder region.

They help the player get a firmer grip on the ball. Additionally, a pair of gloves helps to prevent injuries when fighting off opponents.

It consists of foam that holds the neckline at the back of the player’s jersey. It helps to prevent or decrease neck injuries. It also prevents neck dislocation, as it limits how far the head can move backward.

Your body needs protection as much as your head during a football game. Football pads consist of padded hard plastics. They help to protect players as they hit one another during a game. They also reduce the impact on vital areas of the body.

Some of the body areas you can use football pads include chest, elbows, hips, knee caps, and legs.

It identifies one team from another, as all players in a team wear matching shirts that differ from the opposing team. It should be able to cover the shoulder pads. As such, it has to be large.

However, each player in a team has a specific number at the front and back of his jersey. The number differentiates him from another player. Sometimes it appears on the sleeve in some high school and college teams.

The numbers are usually specific to the player’s position. For instance, Kickers and Quarterbacks wear 1 to 19, and Receivers wear between 10 to 19 or 80 to 89.

The player’s last name is above the number at the back of the jersey.

They are tight-fitting and are almost like a second skin. They keep the hip and knee pads in place.

Football players don’t need to wear underwear. But it’s necessary for modesty, including for the protection of their genitals.

However, you don’t wear just any type of underwear for football. The underwear you choose should hold your privates in place, give you protection, and comfort while you play. Other protective gears like helmets and facemasks are compulsory to ensure your safety during the game.

Why Do I Swallow So Loud? Check Out The Possible Reasons

The human body is so unique that you can detect when something isn’t right in your system. But then, it would also depend on...