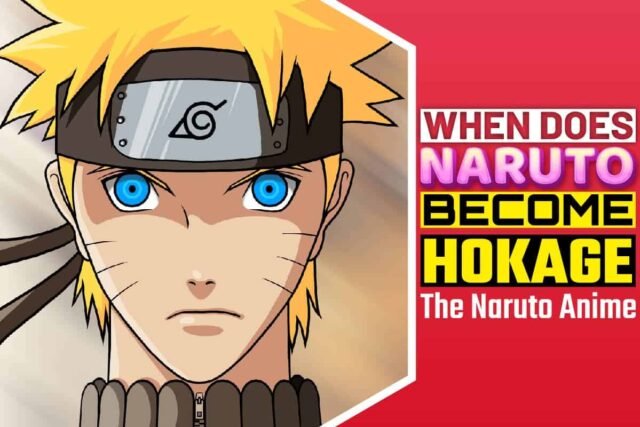 In Masashi Kishimoto’s fictional world, the world of Naruto, each of the five hidden villages gets guarded by a leader called Kage. The Kage are usually the most powerful fighters in each community. The title gets passed down after a while to the next best fighter. The Kage of Konohagakure, Naruto’s village, is known as a Hokage. In this article, you will when Naruto became Hokage.

When Does Naruto Become Hokage?

Naruto became Hokage at the age of thirty years after Kakashi ruled for thirteen years in Konohagakure. Since Naruto was a child, he desired to become the Hokage of his village. His drive to become a Hokage was to protect his loved ones. You can see the Hokage ceremony of Naruto in the Boruto series in episode eighteen.

The Age Of Naruto When He Became Hokage

It is a difficult question to answer because the dates in Naruto aren’t always precise. However, you can still deduce the chronology from the events because some of them have a (rough) date. Thanks to Laudy Dorado from Quora, you can know Naruto’s exact age when he became Hokage. Here’s how to do it:

Kakashi developed feelings towards Kahryo (sister of Gahro, both Ice Style users like Haku). There were some hints that Kahryo was Haku’s mother, but nothing definitive got revealed. Surprisingly, Might Guy assisted Kakashi in the hot air balloon battles.

After Mui’s death, the Hozuki Castle/Blood Prison in Hidden Grass Village needed a new warden. Therefore, Kakashi suggested Kahryo to the Leaf-Cloud-Grass higher-ups during this mission. After the mission, Kakashi was appointed Sixth Hokage at the age of 32.

According to characters in “The Last” film, two years had passed since the appointment of Kakashi as the sixth Hokage. Therefore it implied that Naruto would be 19–20 during his marriage to Hinata Hyuga. Kakashi had already served as the Sixth Hokage for two years, as seen from this evidence. Naruto was already a Jounin when he arrived.

Two years since the beginning of the Boruto series, Boruto was ten, and Himawari was 5. That is an addition of five more years. Moreover, at that time, it was when Naruto got sworn in as the Seventh Hokage. Naruto was 31 years old, while Kakashi had been the ruler of Konoha for 13 years and was now 47.

Boruto’s Mist ninja Kagura Karatachi said it had been 15 years since the Fourth Great Ninja War when he was born. Moreover, the Boruto series began precisely two years after Naruto became the Seventh Hokage and Kakashi retired. That means that at the beginning of the Boruto series, Naruto is 33 years old, and Kakashi is 49 years old. Therefore, all these sums up the age of Naruto when he became Hokage, and it was 33 years.

It’s the morning of Naruto‘s Hokage inauguration, but he is still asleep. Hinata asks Boruto and Himawari to wake him, and when Himawari’s “cutesy” way fails, Boruto jumps on him. Hinata says she will go pick up his cloak before the ceremony if it’s not finished at the breakfast table.

Naruto remembers when Kakashi‘s cloak did not get finished in time. Hinata instructs Naruto to go to the venue with the kids quickly while she picks up the cloak.

Upon arriving and finding that Naruto has not come, Hinata rushes home. Naruto is ready to go, but Boruto and Himawari fight over a stuffed panda that Himawari wants to bring with her. Boruto says it will embarrass him in front of the villagers.

As they have a tug-of-war over it, the panda rips in half. Angry, Himawari awakens the Byakugan and attacks a terrified Boruto. Confused and alarmed, Naruto tries to stop the fight by saying they need to stop it but is struck by Himawari’s finger in the abdomen. It causes Kurama to react painfully and knocks Naruto unconscious.

At the ceremony, Sarada is in the audience with her mother and friends and meets with Chōchō. Chocho hopes the event will be over soon. Sarada silently wonders what’s taking the Hokage so long to appear.

Kakashi tells Shikamaru that they can’t wait any longer and decide to have Konohamaru impersonate Naruto. As the inauguration begins, Sakura voices her pride for Naruto achieving his dream. On the other hand, Iruka says Naruto will be facing some challenging times ahead.

At the Uzumaki residence, Hinata finds Naruto unconscious. It was due to all of his chakra points being hit, which will leave him out cold for the rest of the day. She then wonders who could have done such a thing.

Boruto is hiding in a closet with his sister. She then enters the room with a homicidal look in her eyes and asks if he is playing hide-and-seek with her. When it seems that Himawari has found him, Boruto lets out a fearful scream.

How To know Naruto Wanted To Become Hokage

Masashi Kishimoto created the anime and manga series Naruto, starring Naruto Uzumaki as the lead character. He is a young ninja from Konohagakure, a fictional village. People in the small-town made fun of Naruto because of the Nine-Tailed Demon Fox. A dangerous monster that attacked Konohagakure got trapped inside Naruto’s body.

From a young age, Naruto, like his friend and rival Sasuke Uchiha, desired to be Hokage. A position he later attained thanks to hard work and perseverance. However, their objectives were different. Sasuke wanted more power. However, Naruto recognized that being a Hokage entails responsibility and protecting the village in charge.

His father, Minato Namikaze, was the village’s Fourth Hokage. He fought the Fox using a special technique that he used to defeat Nine-Tails. He then used the Dead Demon Consuming Seal to lock the demon’s Yang half inside the boy, sacrificing his life. He knew that the people of Konohagakure would hate Naruto because he carried Kurama inside him.

Therefore, the Fourth Hokage instructed the previous, Third Hogake, Hiruzen Sarutobi, to tell the villagers to respect Naruto. Moreover, they should also accept him as an equal because he helped indirectly save the village.

Naruto dedicated his entire life to becoming the greatest shinobi. He didn’t do it for power or fame but rather to protect the people who meant the most to him. So, yes, he wanted to be Hokage, and he deserved to be because of his efforts in the Fourth Shinobi World War.

When Did Naruto Become Hokage And How To Watch It

One can make some educated guesses about when he became a Hokage.  Naruto became Hokage about 7-8 years after Boruto was born. It is just a guess based on Naruto’s marriage and Boruto’s birth. However, one can see Naruto’s Hokage ceremony. There are two ways you can watch this.

No, he doesn’t. In Boruto, Naruto does not become Hokage. Naruto has already been a Hokage for a few years. He became Hokage a few years before the events of the Boruto anime and manga.

There is a massive development in the Leaf Village’s infrastructure, technology, and economic growth in the Boruto episode. It essentially means that Naruto has been Hokage for several years and has been working tirelessly to further the development of the village.

No, he does not. The 4th Great Ninja War ended with Naruto and Sasuke’s fight in the final valley. Naruto became the hero who saved the world after the war. However, he was still not mature enough to take on the title of Hokage. Therefore, Tsunade, the elders, and the council decided to make Kakashi the next Hokage for these reasons. Kakashi made Naruto take lessons, pass the exam, and become a Jonin to become the Hokage soon.

Naruto is among the best anime you can watch. It has exciting scenes all way through to the end. From Naruto’s childhood, his dream was always to become a Hokage in his village. He wanted this so that he could protect those he held dear.

In the naruto series, there is nowhere that you can see Naruto’s Hokage ceremony scenes. However, you can see it in the Boruto series. After deducing the events in naruto, it is safe to say that Naruto became Hokage at the age of Thirty-one.

Culture unites people in different parts of the world, primarily through shared traditions, beliefs, and expectations. There are thousands of cultures existing in all...