Why Do Poor People Vote Republican? The Lower Class In The United States And Their Political Party 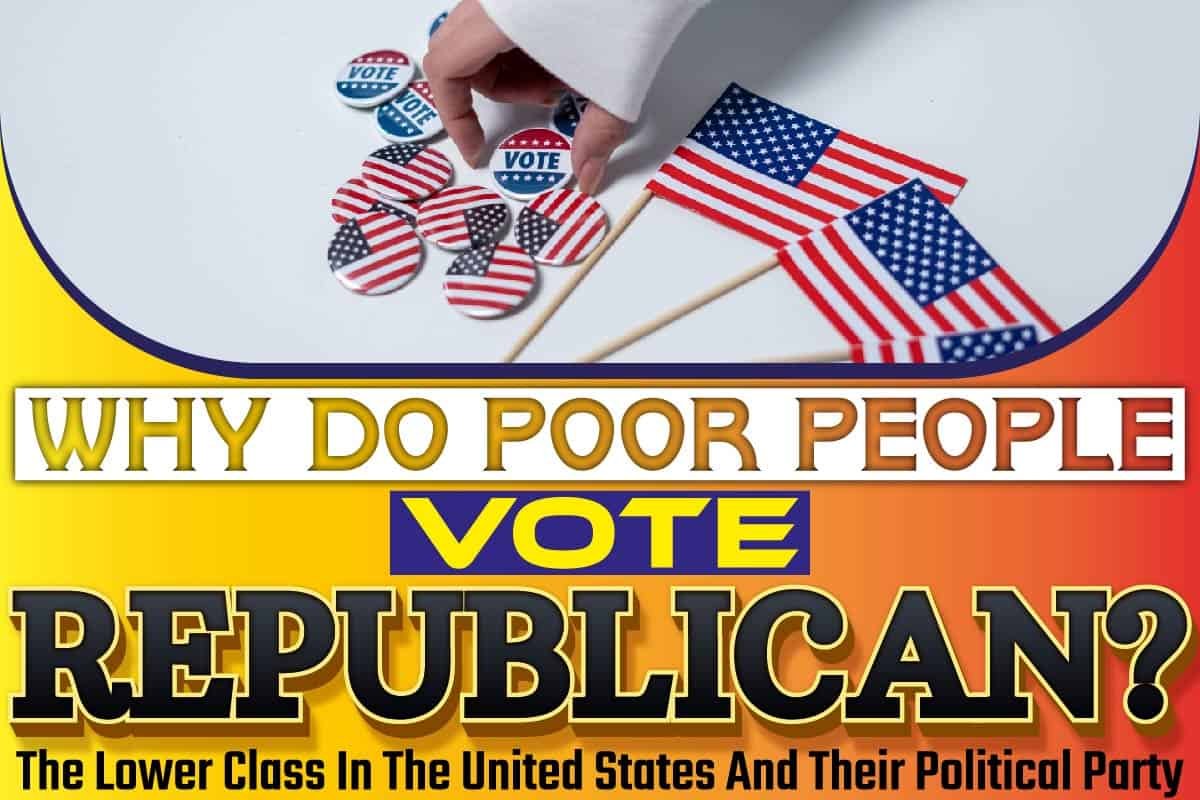 Most American social scientists agree that there is a social division into social classes. Social classes are hierarchical groups based on wealth, education, occupation, income, subculture, or social network membership. In the United States, social class is a contentious issue with many competing definitions, models, and even disagreements over its existence.

Many Americans recognize a three-tiered model that includes the upper, middle, and lower classes. Different classes in America vote differently. In most cases, the lower class often vote republican for many reasons.

Why Do Poor People Vote Republican?

One of the most perplexing aspects of American politics is why so many people at the bottom of the income distribution vote Republican. They do so despite Republican policies frequently favoring the interests of wealthy business owners. Republicans can win over impoverished voters by appealing to their other policy preferences and fault lines based on race, religion, education, and nationalist sentiment. Here are some of the reasons contributing to most poor people voting republican

Donald Trump portrayed immigrants as an invading force stealing their jobs and threatening violence. He has appealed to white supremacists by appealing to white nationalism. Despite the Republican candidate’s direct attacks on Hispanic immigrants, a sizable proportion voted for him.

Republicans portray themselves as the party of traditional religious beliefs and conservative family values. Many Latino immigrants are devout Catholics. They may be uncomfortable with the mainstream’s more liberal approach to sexual behavior. Electing Republicans is therefore seen as supporting traditional family structures like marriage and parenthood.

It’s common for authoritarian leaders to seek international blame when the economy is terrible. German fascists, who saw themselves as the victims of the war’s winners, used this tactic to their advantage. Those with a low and declining standard of living are more likely to believe that the world is hostile and that others are taking advantage of their plight. In the case of the United States, China’s rise as an industrial powerhouse has made it an easy target.

According to conservatives, China has gotten rich by “stealing” American manufacturing jobs. They have also destroyed American manufacturing by flooding the market with products sold below the cost of production. While these complaints may have some merit, China can also be a convenient scapegoat for the nation’s growing inequality issues.

Elites Of The Coast

Hillary Clinton’s opponents painted her as an elitist who looked down on most Americans during the 2016 presidential campaign. When she called people on the other side of the political spectrum “deplorable,” it fueled this narrative.

The Psychological Aspects Of Living In A Dangerous World

On average, political conservatives (defined as high scorers on a right-wing authoritarianism scale) may experience fear more intensely. Even before they get involved in politics, children show signs of conservatism that are already present in their early years. Children who adhere to the rules in games with other children may be more likely to vote for conservative leaders in the future. They appear to be more rigid in their behavior and to have a more difficult time making new friends.

One can interpret the fear of the unknown as a sensitivity to danger mediated by limbic-system activation. This profile most likely reflects mammalian adaptations to actual environmental risk. Children raised in extreme poverty or subjected to cruel parental practices may believe that their lives are dangerous and require caution.

Political conservatives often find support when faced with external threats that reinforce their worldview. However, now there is an internal threat, the pandemic. It has encouraged people to seek help and support from our political leaders.

Now, people are living with the reality of a widespread health threat. Therefore, they have become more sensitive to the needs of those in society who are most vulnerable. The most vulnerable people include the poor, ethnic minorities, and those with compromised immune systems. It’s clear that in today’s new and more dangerous world, everyone is in this together and that they must work together to combat the health threat.

Appeals to political fault lines are less likely to succeed. Moreover, the disaster lifts a veil, revealing that some groups’ health needs are woefully underserved.

The pandemic demonstrates that people have little control of infection unless people address these groups’ medical deficiencies. The division is no longer an option since everyone has a vested interest in surviving.

The Lower Middle Class In The United States

The lower-middle class is one of the largest social groups, second only to the working class. People in the lower-middle-class often work in low-status professions like teaching, nursing, or paralegal. These occupations usually necessitate some education but not a graduate degree. Lower-middle-class jobs typically pay well, but they place people in the bottom third of income earners.

Some class models place the lower middle class somewhere between the 52nd and 84th percentiles of society. Concerning personal income distribution in 2005, that translates to gross annual personal incomes ranging from $32,500 to $60,000. Since 42 percent of all households had two income earners, household income figures would be significantly higher.

It ranges from roughly $50,000 to $100,000 annually. About 27 percent of people had a bachelor’s degree or higher in educational attainment. Lower middle-class people are more likely to have some college education if the upper-middle and upper classes make up 16% of the population. People in the lower socioeconomic strata have little education, little money, and low-status jobs.

The Lower Class In The United States(The Poor)

People call those who work in lower-wage occupations the working poor. Participants in the labor force who do not have a primary source of income other than public assistance like food stamps and welfare are the poor. In general, lower-class people work in easily filled jobs but offer little prestige or financial compensation. These people frequently lack a high school diploma.

A variety of factors can lead to unemployment.  Low educational attainment and disabilities are two of the most common causes. The disability factors include both physical and mental illnesses that hinder academic or occupational success. The poverty line is the point at which a person’s income qualifies them for government assistance.

Does Trump Play A Role In Poor People Voting Republican?

Yes, he did. Trump played a significant role in making poor people vote Republicans. He said that the immigrants in America have come to steal the available well-paying jobs for the whites. Moreover, they have threatened violence. Since the poo has low-paying jobs, they voted republican, hoping that Trump would regain those jobs.

What Is The Wealth Gap Between The Upper-Class And Lower-Class?

The highest wealth gap between the upper class and lower class got recorded in 2016. In recent years the wealth gap had a ratio of 6.3. However, in 2016 the percentage increased to 7.3.

America has divided itself into classes. There are the upper class, middle class, and lower class. The lower class in America comprises 29% of the American households. According to a report in 2018. Their median income was $25624 in 2016.