Why Do Cities Vote Democrat: The American Politics 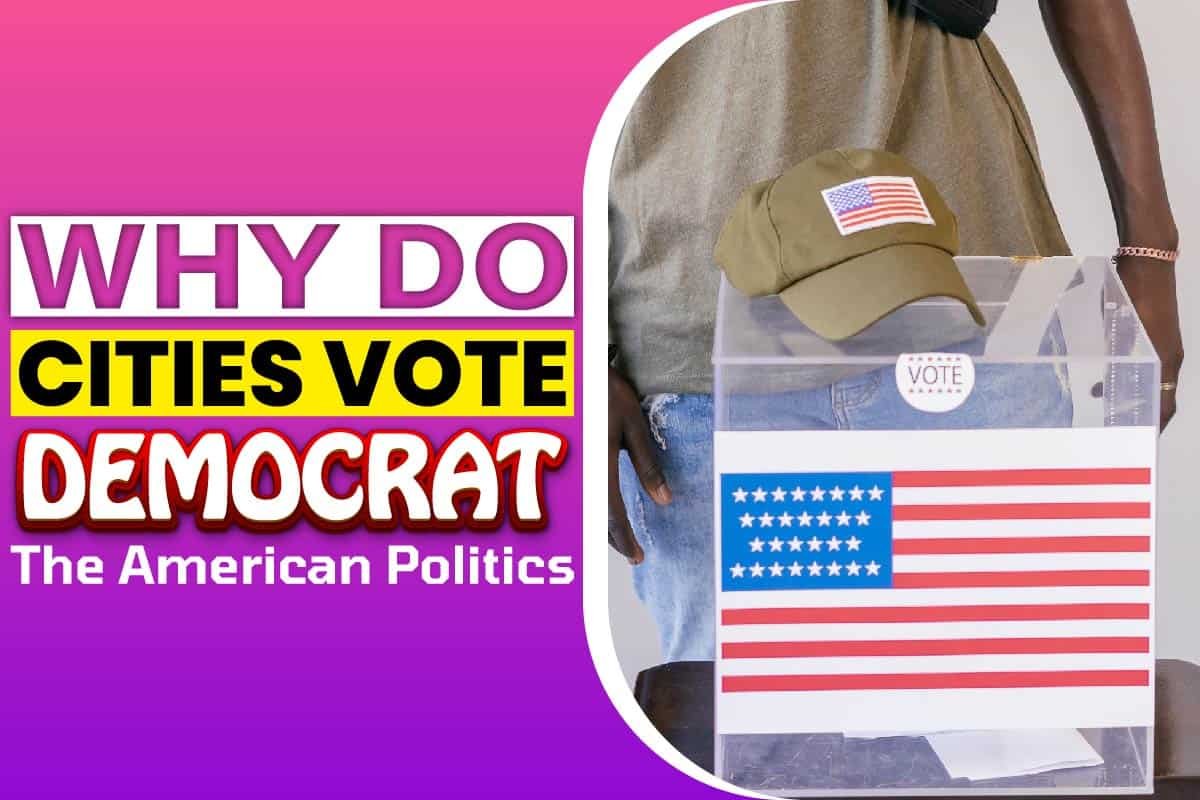 The American geographical divides are at the heart of contemporary politics, including Donald Trump’s election. Election maps show dense liberal cities in a sea of sparsely populated Red, a geographic electoral system that favors Republicans. Why are Democrats concentrating their efforts in cities?

Statistics show an increase in the concentration of left parties around the world, which disadvantages liberal cities. It began with a unionized industrial railroad hub. However, it has accelerated due to the changing cultural values of the party’s new coalitions.

Urban and rural areas are becoming economically and psychologically distinct. The cities are concentrating on those open to new experiences and working in a technology-driven economy. On the other hand, rural areas are retaining those opposed to social and economic change.

Why Do Cities Vote Democrat?

Cities have played a crucial role in the presidential election, especially the 2020 presidential election. Most of those living in the cities vote democrat instead of republican. There are many reasons why cities vote democrat. Unlike people in rural areas, city residents have more education than those in rural areas. The education that the city people have made their mindset change and be consistent with the democratic party.

With the 2020 election finally over, you can take a look at how different cities voted. You can compare how the rural and urban areas voted. You may have noticed that nearly all of the nation’s densely populated urban regions voted Democratic. Rural areas, on the other hand, were almost always Republican.

When you zoom in on nearly every state’s election results map, you’ll notice a sea of red in rural areas and of blue in the most densely populated areas. There are various reasons why people in the cities voted democrat and not republican. Here are some of the reasons why.

Large cities have a higher density of educated people. Nearly 90 percent of college graduates live in the cities. To gain a better understanding of various topics, one must gain more education. It also includes primary political debates like climate change, economics, women’s rights, and racism.

Education, in general, and political education in particular, allow people to see issues from different perspectives that they may not have had otherwise. It appears that as one gains a deeper understanding of these complex issues, they become more progressive. Therefore they develop a desire for progress and hope for the future, a mindset consistent with democratic ideals.

The second reason big cities are more likely to vote blue is cultural diversity, resulting in more sympathetic people. Large urban areas have a much more diverse population than small rural towns. People in big cities are more diverse in race, sexuality, social class, upbringing, etc. On the other hand, small rural towns frequently have a more homogeneous population of these defining characteristics.

As a result of these differences, people in these larger cities have better personal relationships with people from different backgrounds and life struggles. White people have friendships with black people, straight people have gay friends and wealthy people have friendships with poor people. Humans tend to better understand and sympathize with others who have different characteristics and backgrounds than themselves. Therefore it results in more people in the cities voting democrat other than republican.

The United States is now a tale of two very different places, economically, culturally, geographically, and politically. Those areas of the country that have seen steady growth, primarily in the cities and the surrounding metropolitan regions, have economically separated themselves from the country. Cities have been driving economic outcomes for a generation. However, this most recent presidential election has shifted because urban areas and their suburbs made the difference in electing the next United States president.

However, the popular vote does not determine the winner of the election. Philadelphia, Detroit, Atlanta, Milwaukee, Phoenix, Las Vegas, and their metro areas win elections. These cities served as actual battlegrounds in the 2020 presidential election. The nationwide, diverse metro-area coalition of voters wanted increased focus on racial inequality and COVID-19. Therefore, they led to this year’s challenger receiving the highest popular vote margin since Franklin D. Roosevelt defeated Herbert Hoover in 1932.

In almost every state’s primary city, President-elect Joe Biden showed his impressive muscle in urban and inner suburbs. In major cities with significant Black populations, such as Detroit, Cleveland, Milwaukee, and Atlanta, the president-elect met or exceeded former Secretary of State Hillary Rodham Clinton’s performance. Biden also improved the Democrats’ standing among white voters in battleground states,  with and without college degrees.

The voting results reveal a clear urban-rural divide. Racial inequality, COVID-19 response, and the economy led to the gap between urban and rural voters. The exit polls ultimately confirm that America is still a country grappling with who they are.

Voters in metropolitan areas noticed the anti-racism demonstrations across the country and responded by calling for legislation. There has been much tragic racial violence across the country. Some include the murder of George Floyd and so many other Black men and women.

The lopsided prioritization of racial inequality speaks to America’s challenges confronting racism and seeking solutions for the collective future. According to exit polls, 92 percent of Biden voters saw racial inequality as the most crucial issue in deciding who would be president. On the other hand, only 7 percent of Trump supporters did.

There has been a long-term economic decoupling between metro areas and the rest of the country. It has even gotten worse as traditional industries like coal mining, farming, and manufacturing have declined. As people have continued to migrate to cities, the economies and populations of the metro areas have grown, while the economy in rural areas has declined. This economic dislocation has been matched politically, as city residents’ perspectives on a wide range of issues differ markedly from their rural counterparts.

According to recent Brookings Institution research, Biden won counties that generated 70% of the country’s economic output. It was an increase from 2016 when Clinton won counties that generated two-thirds of the nation’s economic output. During the presidential election, 83 percent of Trump voters viewed the economy as the most crucial issue. Only 17 percent of Biden voters did. Trump won smaller cities and rural areas where most people are white, work in traditional, struggling industries, and lack college degrees. On the other hand, Biden increased the Democratic Party’s footprint in developing areas with a diverse, college-educated population working in digital and other expanding industries.

There are several lessons to take from the recent presidential election. However, two, in particular, need more attention since they are particularly relevant to the cities.

Does Density Play A Significant Role In The Metro Vote?

Yes, it does. To capture it, people use a measure of population-based density, accounting for the concentration of people in the metro. Obama’s average metro was twice as dense as that of Romney. It was what made Obama have a cutting edge in his presidential election. In that election, density was even a more significant factor than population.

In the 2020 presidential elections, it was more of a battle between the cities and rural areas. Most of the people in the urban regions voted democrat while those in rural voted republican. Therefore cities played a significant role in the presidential elections. There are different reasons why people in the urban areas voted Democrats. Some of the reasons included education and cultural diversity.