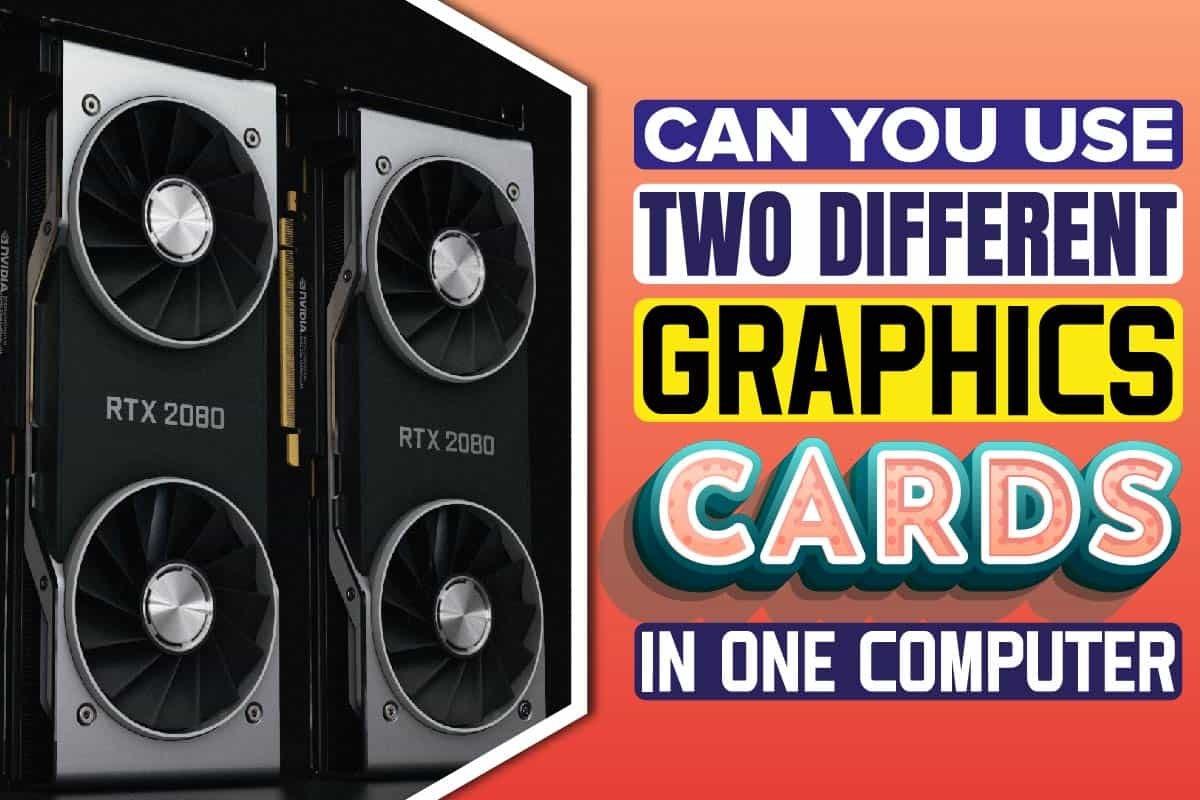 The graphics card is a crucial component in a computer system. But know this; not all computers have a graphics card.

All PCs or laptops boast a built-in graphics memory, used in crucial tasks like low-level graphics games, video playbacks, user interface, etc. But it’s not the same as a graphics card.

The graphics card, also called a video or display card, is optimized to display high-quality graphics with higher speed.

So, graphic-intensive games and programs require a laptop or PC with a higher graphics card. Otherwise, you won’t enjoy playing your video game or running certain software.

Now you know why avid gamers and graphic designers go after computers with higher video cards. It makes playing high-end video games or software a breeze.

So, if combining two graphics cards can help improve the graphical output of any computer, then it’s a wise investment.

Can you use two different graphics cards on one computer?

Yes, you can. But don’t expect frame rate performance to increase when you mount two different graphics cards in one computer. Your monitor will receive graphical output from each card. They’ll also handle separate tasks.

Since the video cards are different, you cannot link them alongside each other. It doesn’t matter if you’re using Crossfire or SLI.

That’s the answer to the question. But there’s more you need to know regarding this topic. So, keep reading.

Things To Consider Before Mounting Two Graphics Cards In A Computer

Technically, it’s possible to have two display cards on one computer. Both will function well. But there are things you need to consider before mounting an extra card on your computer.

Let’s find out what those factors are.

Determine the intended application or usage:

What’s the reason you need an extra video card? If it’s to play video games, it’s a wise move. Having two video cards render the same image will cause the game to run at a higher resolution and frame rate.

But know this; not every application will take advantage or benefit from your dual video card setup. So, it would be best if you got your priorities right before you think of mounting an extra card in your computer system.

Your motherboard has enough slots to attach an extra video card. But please, before attaching, check if the cards are compatible.

Linking two different cards is a complete waste of time. You won’t enjoy the benefits having dual cards in a computer brings.

If you happen to be an avid gamer and enjoy playing graphic-intensive video games, both cards won’t be able to render the game’s graphics.

So, make sure your GPUs are identical before mounting them on your computer.

You’ll have to mount both video cards on the motherboard. So the motherboard is equally important. And it will determine if having dual cards on your computer would be possible.

If the motherboard is compatible, then you’re good to go. But if it isn’t, you can’t do anything to change that.

How will you know if the motherboard will support dual video cards? Well, there’s nothing technical or difficult about this.

Firstly, you have to check the product’s package for clues. And keep an eye out for the Crossfire or SLI symbol.

Another way is to check the product’s official website for clues.

There’s a possibility of a performance drop:

Yes, this might happen when you add an extra card to your computer. There’s a huge chance that your computer system might go from x16 to x8 PCIe lanes upon mounting a dual card on the computer.

But don’t panic. It’s only a little reduction in performance.

How large is the desktop case? This can play a role in whether your quest to mount a second video card would be a breeze or not.

Since you’re adding extra hardware, the desktop case must be spacious enough to accommodate it.

The power supply is equally very important. It will determine if your new combination of cards will work seamlessly on not.

You have to be certain that the power supply supports the two cards you’re mounting on the computer system.

By now, you should have known that Nvidia GPU utilizes SLI. But here’s what you need to know too.

You cannot use another video card if the bridge, VRAM, and GPU aren’t identical. SLI wants all these components we have just listed to be identical.

The second GPU is AMD, which uses Crossfire. But unlike the Nvidia, you’ll only require an identical GPU if you’re dealing with new video cards.

Not having identical VRAM isn’t also a big deal here. But keep in mind that old video cards would require a bridge.

How To Mount Two Graphics Card In A Computer

It’s easy to mount a second video card on a computer. It’s the same step as mounting the first video card.

You can even mount the card by yourself if you have some technical skills. Just follow the right steps.

Here are the steps below.

The first step is to wipe off the drivers. You can install them back once you’re done mounting the second video card.

Go to the device manager. Just choose the GPU drivers and have them removed. It’s simple; right-click and then choose “uninstall.” That’s it.

Step#2: Get inside the computer’s case:

The next thing is to open the computer’s case to access the motherboard and PCI slots.

But please don’t open the case if the computer is still connected to a power source. Unplug the computer to avoid getting electrocuted.

Now, get the video card into its rightful position. Please ensure it sits snugly in place. You’ll know the card is in place when its clip closes.

Step#4: Get the case back in position:

Since you have attached the second video card, it’s time to close the computer’s case. But before doing that, you have to ensure the GPU is secured. To ensure that, have it screwed to the case and check to make sure it’s not loose.

Now close the case. You’re almost there! The next move is to have the power supply connected to the previous and new graphics cards.

It’s normal to uninstall drivers before attaching a new video card. But after mounting it, you have to download and install the GPU drivers.

If the installation was successful, you could determine that with ease.

Just visit the device manager and look at how both GPUs are displaying. If there’s an error or warning sign, something is wrong. If there’s no sign, and you can see both GPUs, you’re good to go.

The question is, can you use two different graphics cards on a computer? We have answered this question at the beginning of the post. But let’s still give a summary here. It’s possible to have two video cards linked. But if they’re different, you can’t link them in tandem.

Again, each video card will work independently. We mentioned factors to consider before giving dual video cards a shot, including how to mount a second graphics card. You can have a look and use the knowledge gained on your computer system.