Do Female Cows Have Horns? – The Why And How Of Horns 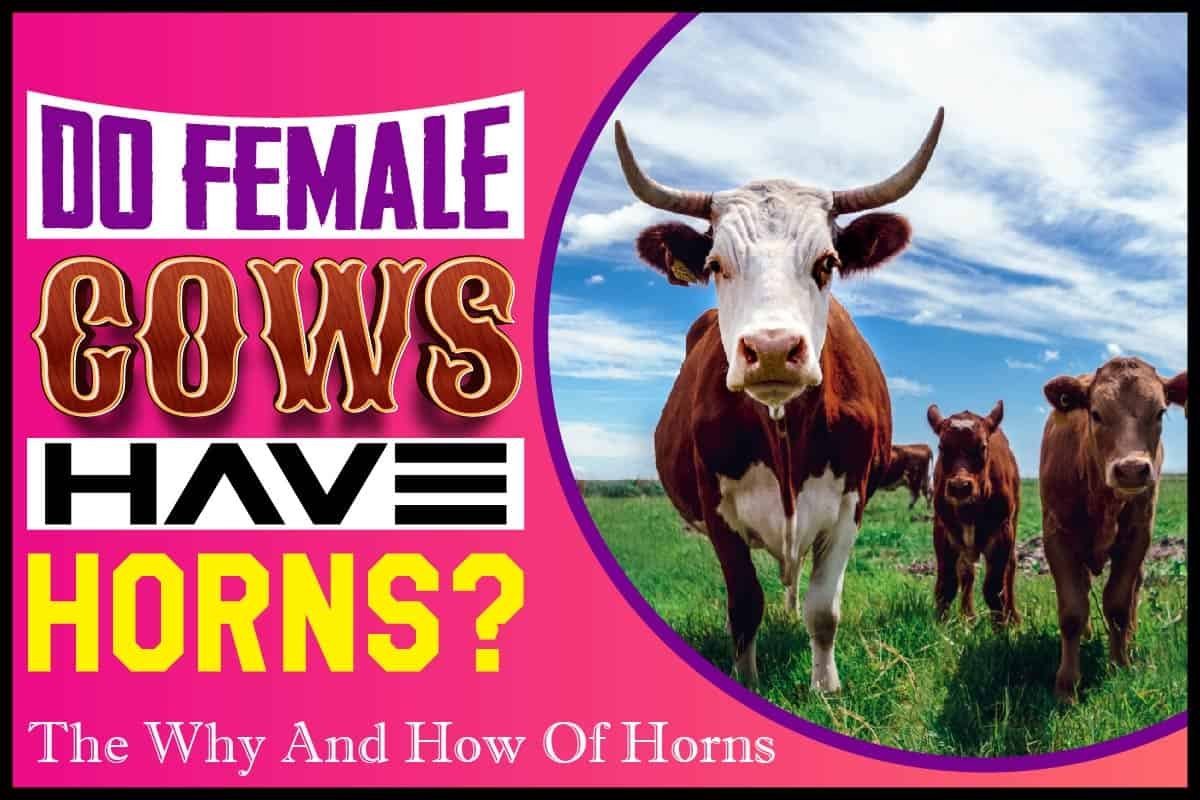 Most people are not aware of how social the cows can be. They are capable of forming lifelong relationships with humans.

The other thing that makes cows exceptional is their ability to appreciate music and love to nuzzle and cuddle.

The cows tend to be so curious about other animals too. When given a chance, they’ll indeed explore everything around them.

However, humans do love cows for various reasons. The main reason being, they provide popular food products like meat and milk.

If you have visited the ranches, I’m sure you’ve noticed that most female cows are hornless. They were not born that way.

I know this has made things more complicated and confusing. So, let’s get back to the question.

Do female cows have horns?

Yes. Generally, both male and female cows naturally grow horns. Most of the female cows in farms without horns have undergone dehorning.

It’s one unpleasant process with more incredible benefits. Dehorning is the process of removing horns from the cattle, mainly done to dairy calves.

Must Calves Be Dehorned?

Most farmers hate performing this procedure on their calves. I can bet that 90% of the farmers do not enjoy doing it. Though, it has several benefits to the farmers and other farm animals.

The horns are dangerous not only for the farmer but also for other farm animals. Imagine a fight between cows with horns and weights of around 1500lbs.

It’s graphic with blood spills all over. It may even lead to the death of another animal. Dehorning helps save space during transportation and feeding.

Some breeds tend to have very long horns that may pose a hindrance during certain activities. Dehorning is the main reason behind the many hornless female cows.

Other reasons behind dehorning are:

Dehorning requires excellent levels of attentiveness and cleanliness. The dehorning procedure should be done exceptionally well to minimize pain.

It’s advisable for dehorning to be done at your animal at the early stages of its growth. Calves are born with horn buds.

These are tissues that grow into horns at late stages. At birth and early years, the horn buds are not wholly attached to the body.

Therefore dehorning a calf is less painful compared to dehorning a grown cow. When it comes to calves, it’s not only reduced pain.

They are easier to handle and work with compared to grown cows. Before the dehorning process, calves are given a long-lasting pain injection.

This is done about two hours before the process. At times lidocaine, the drug that most dentists used, can also be used on the calf. It has no effects on the cow and helps numb the area.

The lidocaine will make the place less painful, and the long-lasting drug will take effect once lidocaine is used up.

Such pain measures are beneficial to the cow. Plus, it ensures the humane treatment of farm animals.

Several tools can be used for dehorning. However, it’ll be better to use a tool that uses heat like the butane dehorner.

It cauterizes the blood flow to the horn, meaning it won’t ever grow. Hot metal is put on the tip bud to burn cells around. It’s quite a painful procedure, and that’s why the area is made numb.

After dehorning closely, observe your calf and be extra loving. It’s because, after some days, the place becomes itchy.

If not well taken care of, the calves can scratch the wall and later develop into bigger wounds. At the time, you can rub the part lightly while it’s feeding. That’ll be more therapeutic.

There are several ways of dehorning cattle. It ranges from surgical to genetic. The farmer makes a choice depending on needs. The choice should, however, be safe for both the animal and the farmer.

Many producers dehorn the newborn calves since they are easier to handle and face minor risks. Here are some of the standard dehorning methods employed by farmers.

It’s pretty easy but should be done with lots of caution. This procedure is commonly done on calves aged between one to three weeks. Caustic chemicals are carefully applied to the horn buds.

This will kill the tissues and cells hence preventing the growth of horns. When applying the chemical, wear gloves for protection.

Be keen when applying it on the calf; avoid application near its eyes. It may lead to complications such as loss of eyesight.

The caustic chemicals should not be used during rainy or wet seasons. The advantages of chemical dehorning are several.

The most noted ones are: it’s less stressful and bloodless. However, if not applied with anesthesia, it can be pretty painful.

It’s a quick and efficient way of dehorning calves under eight weeks of age. The sharpened metal tools cut through and remove the buds from the skin.

With this technique, you are sure the horn buds are entirely removed. However, it’s not bloodless, and if not done correctly, the calf might bleed to death.

This means it does require expertise in dehorning and application of sedatives. This procedure should not be done during fly seasons.

The flies will make the calf uncomfortable with their bites. Plus, flies may bring about infections.

The hot irons vary in models. Some are heated through the furnace, while others have 12-volt batteries and 12-volt electricity.

These options carters to every need, i.e., those living in areas with unreliable electricity can use the battery or furnace type.

The irons have a hollow circle at the head. The hole fits over the horn bud, and if correctly applied, it will effectively stop the growth of the horns.

Hot iron dehorning is best used on calves of up to twelve weeks. The dehorning irons do vary according to size. Choose one that will adequately fit with the horn bud size.

The great thing is it’s bloodless and can be used on calves of up to twelve months. However, it requires expertise and pain control. When done wrongly, it can lead to partial horn growth.

Other Procedures Done To Cows

It’s the destruction or removal of the testicles. Just like in dehorning, many producers choose to castrate their male cows during their younger ages.

Reasons behind this are still similar and include easier handling and lower risks for infections or reduced productivity.

Several techniques can be used to actualize the castration process.  It includes hormonal, chemical, or physical activities.

However, the commonly used method is physical castration. It involves technically clumping off the testicles or blocking blood flow to the testicle.

This eventually kills the testicle. Some of the most commonly used castration tools are:

After castration, the calf is secluded in a dry place for quicker healing. It can be done to calves of any age.

However, the best way to learn is by doing it to calves with larger testicles. The larger or older calves tend to experience more stress and bleeding compared to small ones.

Before performing the surgery, ensure the calved is well restrained to avoid injuring the surgeon. The great thing is surgical wounds heal faster compared to ones caused by rubber rings.

Generally, both female and male cows grow horns naturally. However, most producers choose to dehorn the cows because of various reasons.

Therefore don’t get confused when you see a female cow with or without horns. The procedure is primarily done for easier handling during feeding, transporting, and milking.

It also prevents the cows from injuring other farm animals. There are several other routine procedures done to both dairy and beef cows.

It includes things such as castration, tail docking, and many more. They are mostly done to increase productivity.