How Do Ford Fuel Tanks Work? The Best Explanation 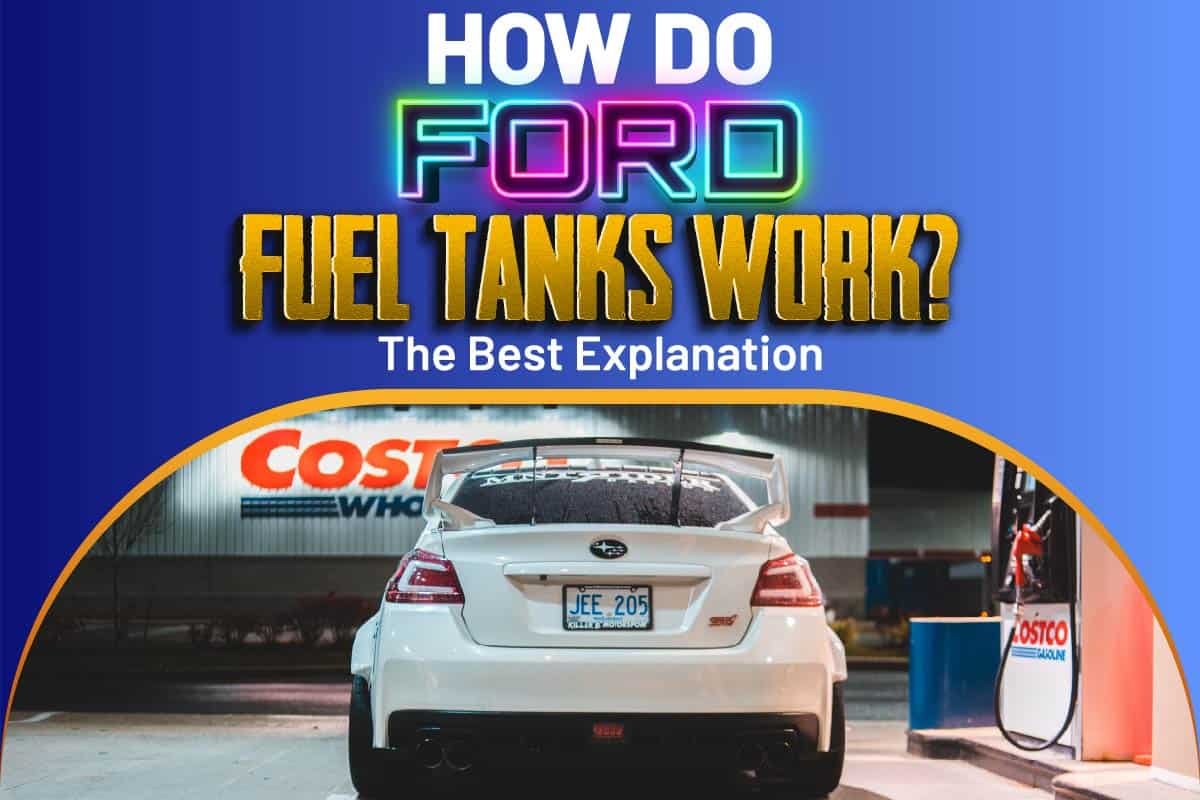 Ford is an American brand of automobiles known for strength, ruggedness, and durability. The Ford Motor Company makes the Ford vehicles line-up consisting of cars, trucks, minivans, and SUVs.

Ford currently has a market share of 13.9% in the US. Only General Motors sells more cars than Ford in the US auto market.

Over to the question, how do Ford fuel tanks work?

Here is how the in-pump fuel tank works. The fuel tank contains an electric pump. A DC motor in the pump assembly draws gasoline from the tank.

It then directs it into fuel rail through the fuel line. From here, the gasoline moves into the cylinder. In the cylinder, fuel sparks with air to create combustion.

Older models and some recent trucks use a dual tank system to function.

Vehicles with a dual tank system have two fuel tanks – a primary and a secondary fuel tank. A balance pipe connects the two tanks.

Depending on the level in both tanks, fuel moves from the primary tank to the secondary tank and vice versa.

Fuel enters the vehicle through the primary tank and moves into the second tank through the balance pipe.

What Was The Idea Behind The Dual Tank System?

Earlier vehicles had smaller tanks than modern vehicles. They could not carry enough fuel as a result.

These days, we have pickup trucks with luxury features which was not the case back then. Motor companies made trucks in those days to be working vehicles. Two tanks ensured that they could last for longer hours.

Also, having twin tanks helped with weight distribution. A single tank can cause weight imbalance on a truck. The reason is that the vehicle goes off balance when it makes a hard turn.

Dual tanks did not only confer ruggedness on the vehicle. It also gave the user road safety and confidence. Fuel pumps can fail in remote areas. With an extra tank, you will not panic.

Newer Ford models use a single tank system to function. So why did Ford abandon the dual tank system? Continue reading for more information.

Why Ford Stopped Making Many Vehicles With A Dual Tank System

Ford dual tanks vehicles are no longer popular. They are still an option on some super-duty models. Production of cars with dual tanks has waned considerably due to decreased demand.

The small size of fuel tanks in those days was the major drawback for single tanks. Since people wanted to cover more range before needing a refill, a second tank became necessary.

To correct this challenge, manufacturers developed the in-tank fuel pump. As a result, producing a car with one big tank was cheaper.

However, some external factors can cause your fuel pump to fail. There are three causes of pump failure. They are fuel contamination, clogged filters, and electrical problems.

Corrosion, dirt, and even water can compromise your fuel. Contaminated fuel can spoil your fuel pump. Dirt can accumulate and clog your pump’s filter.

Smaller particles can escape through the filter and enter the pump and cause blockage. Your engine will not get adequate fuel as a result.

Electrical problems can also cause your pump to fail. Common electrical faults include loose or rusted connectors and melted wiring.

How To Make Your Ford Fuel Pump Last Longer

Fuel pumps are crucial to vehicle function. Yet, as critical as they are, few people know much about how the fuel pump works.

Fuel pumps can fail and will need replacement. The lifespan of fuel pumps depends on how you use your car. Use the following guidelines.

1.Do not allow your fuel tank to get empty

Because your pump is an electric device, it heats up while working. Carmakers, therefore, place it inside the tank for it to remain immersed inside fuel fluid to keep them cool.

Allowing your tank to get empty will cause it to overheat. Your fuel pump can experience thermal shock when you suddenly add fuel to an empty tank

Change your fuel filter at least once a year to keep dirt from entering the pump. Debris can damage your fuel pump.

1. Noise from the fuel tank

If your fuel pump is damaged, it may give off a loud, irritating sound. Pumps give off a low hum. When the sound becomes high, then it means there is a problem.

2. Your car struggles to start

When your fuel pump is faulty, you will have trouble starting your car. This is because it would have lost its pressure and cannot push enough gas to the engine. The car will therefore struggle to start and run. You will have to turn the ignition several times before the engine responds.

3. Your engine will experience sputters

Your engine needs a steady supply of fuel to keep moving. Unfortunately, a faulty pump cannot get enough gas to the engine causing your car to jerk sometimes.

If your vehicle loses power when you go up a steep hill, it is an indication that your fuel pump may be failing. Sometimes it may even go off when you load your trunk with cargo or when you accelerate.

Sometimes, not pumping enough fuel may not be the only sign of a failing pump. Sometimes, a bad pump can get too much gasoline to your engine.

When your pump pushes too much fuel to your engine, it can cause power surges. A power surge can make your car’s speed spike and drop.

When your pump pushes too much power into your engine, your car will use more fuel than it used to. Consequently, you will visit gas stations more often. If your vehicle is consuming more gasoline than before, your pump may need replacement.

Ford vehicles are known for strength and ruggedness. They are also known to be fuel-efficient. Ford models use either a single or a dual fuel tank system to function.

Ford vehicles with single fuel tanks operate using an in-tank pump fuel system. The fuel pump draws fuel from the tank and directs it to the engine injector via the fuel line. The fuel ignites with air to create combustion.

In dual-tank Ford cars, fuel moves from the primary tank to the secondary tank and vice versa. The movement depends on the fuel level in each tank.

Production of Ford vehicles with dual tanks has waned. Instead, new models use big single tanks with an in-tank pumping system.

Debris, contamination, and electrical faults can cause fuel pump failure. Take precautions to keep your fuel pump in good condition. Change fuel filters regularly. Do not let your fuel tank get empty.

Faulty fuel pumps do not supply enough fuel to the engine. As a result, the car may struggle to start and will experience low fuel efficiency. Power surges are also possible.