A Guide On How To Rewind On Twitch 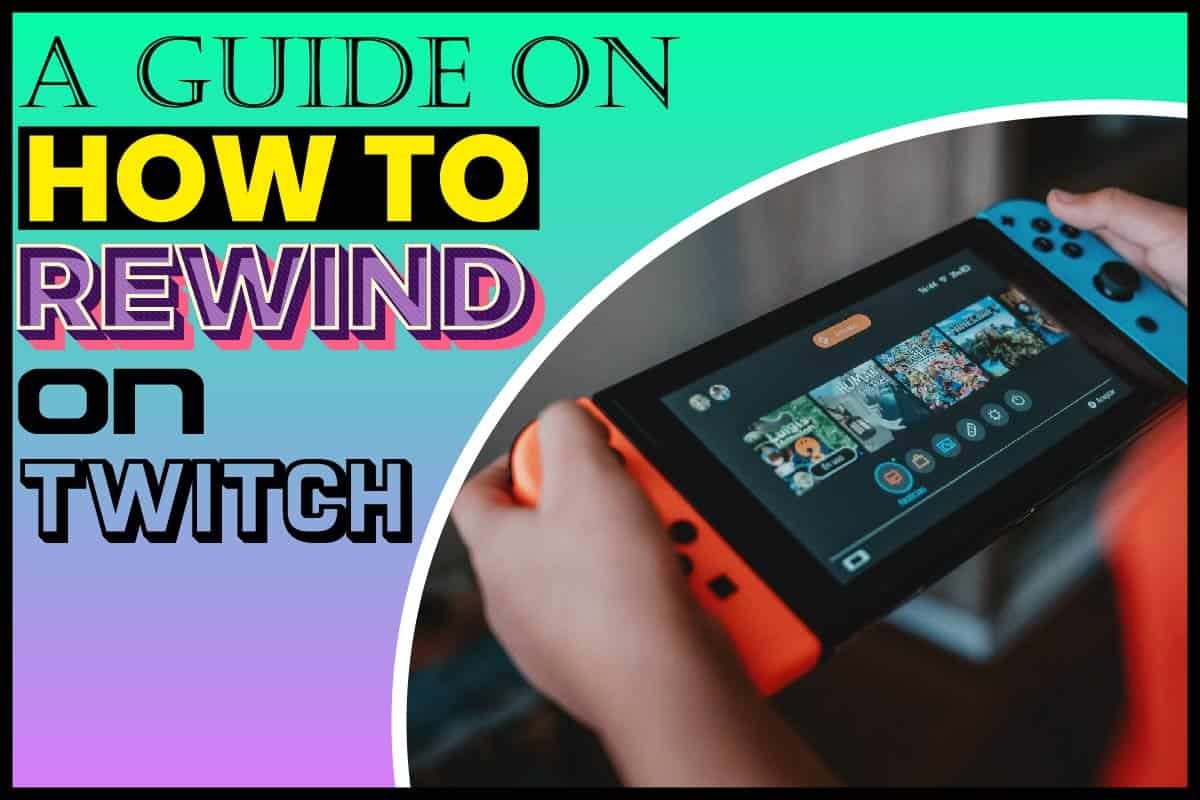 Advances in internet technology have seen the rapid growth of the media and entertainment industry. One significant impact is the steady rise in the number of video streaming platforms.

Twitch is one of the most popular video game streaming platforms in the world. The current number of Twitch users stands at 140 million.

Many streamers love to relive some parts of a motion picture, whether live or recorded. The rewind feature becomes helpful in this regard.

There’s no dedicated rewind option on Twitch yet. However, it is possible to relive all or some aspects of your streaming.

In this post, you’ll learn how you can rewind Twitch and enjoy a great streaming experience.

How To Rewind On Twitch

Rewinding on Twitch hasn’t been an option considered by the streaming platform yet.

Over the years, streamers have invented a few tricks for rewinding whole or parts of a live stream.

Outlined below are some of the tricks streamers employ to rewind Twitch streams.

Streamers may want to rewind to a most recent aspect of a Twitch stream or re-watch the entire stream.

We will consider them one by one.

1. For a most recent aspect of a Twitch stream:

One way to rewind to a most recent aspect of Twitch stream is by creating a clip of the scene. To do this, click on the movie icon at the bottom right of your screen.

Clicking on the movie icon will take you to a new browser window that will display the most recent 1 minute 25 seconds of the ongoing stream.

You can then select and save portions of the stream for up to a minute.

2. For those who want to start from the first minute:

In case you joined a Twitch stream late and want to start at the beginning, follow the tips below.

Clicking on the videos tab will take you to a new page containing clips and videos on demand (VODs). The current stream is usually the most recent VOD.

Click on the icon of the latest videos and browse through the feed to find your stream of interest.

Handy Tip: Turn on the adblocker or subscribe to the stream if you want to avoid ads.

Twitch is a popular Amazon-owned video live streaming service. Game live streaming, music broadcasts, and creative contents are part of the offerings available on Twitch. You can view Twitch content via live stream or from video-on-demand archives.

Twitch is currently the leading video game live streaming platform in the world. As of June 2021, the number of monthly broadcasters on Twitch stands at 9.48 million.

Twitch currently has about 140 million monthly viewers. The number of active daily users has topped 26 million. Twitch has partnered with more than 27,000 channels for its streaming service.

Twitch is currently the fourth prominent source of internet traffic in the United States, trailing behind Netflix, Google and Apple.

Twitch stats are very impressive. But how did they begin?

Twitch emerged as a branch of Justin TV in June 2011. Twitch recorded early success with at least 3.2 million active monthly users in its first year.

As of October 2013, Twitch already had at least 45 million unique visitors. In February 2014, Twitch became the fourth prominent source of peak internet traffic in the United States.

Twitch’s rapid growth attracted interest from Google, which attempted to acquire Twitch for 1 billion dollars in 2014.

Unfortunately, the deal did not pull through. Google had to withdraw due to concerns regarding antitrust laws concerning their ownership of YouTube.

The original Justin TV operations ended in August 2014 as the focus completely shifted to Twitch.

Amazon’s acquisition saw the rise of Twitch’s dominance in the video game and eSports niches.

YouTube and Dailymotion have attempted to provide competition by increasing their gaming content. However, their impact has remained minimal.

Twitch also acquired Curse – an online video community operator – in the same year. It introduced programs that allow streamers receive a commission on the sales of games they play.

Twitch acquisition drive continued in August 2017 with the acquisition of Clip-mine, a video indexing platform.

Twitch rebranded to a new logo and website design in September 2019. In December, the company engaged high-profile streamers like Lirik, Tim the Tatman, and Dr. Lupo in exclusive deals.

Twitch has grown to become the most popular video game and eSports streaming service in the world.

So what do they offer? What features make them unique?

Video game live streaming is Twitch’s primary forte. However, there are other features.

Twitch allows users to follow or subscribe to channels of choice to support their favorite streams. The following feature is free, but the subscription option carries a monthly fee.

Prime gaming also allows streamers to get free monthly games and in-game items in some titles.

Twitch streams also feature a chat system. This chat system provides a platform for twitch users to message each other while watching streams or during downtime.

Do you know you can make money on Twitch? Continue reading to learn more.

How To Make Money On Twitch

Earning an income on Twitch is possible. However, this depends on your level of expertise and followership.

To make money on Twitch, you will have to join their Affiliate Program. Becoming an affiliate is the first step to become a Twitch Partner where you can earn more money.

As a Twitch Affiliate, you can make money from the sales of bits and subscriptions. You can also sell other products.

Requirements To Becoming A Twitch Affiliate

There are requirements to becoming a Twitch Affiliate.

Twitch partners can run ads, and these can increase their earnings. It’s harder to join the partner program than to become an affiliate.

Below are the requirements to become a Twitch partner.

The Future Of Twitch

In recent years, Twitch has been making deals with prominent streamers on the platform. Game developers and publishers like Blizzard Entertainment are not left out.

Twitch became the official streaming partner of the Overwatch league in 2018.

Twitch launched a Safety Advisory Council in May 2020. This council is composed of popular streamers and academic and policy institutes.

The advisory council has seen the creation of rules and guidelines for moderating the platform. These guidelines also cover users’ safety and privacy and feedback collection from marginalized groups.

These factors and many more have consolidated Twitch’s position as a global leader in live streaming.

New live streaming platforms are springing up to provide competition. However, Twitch will continue to grow if it maintains its momentum.

Twitch is the most popular video game streaming platform in the world. The number of current subscribers stands at 140 million.

Many streamers love to relive some parts of a motion picture. There’s no dedicated rewind option on Twitch yet. However, it is possible to relive all or some aspects of your streaming.

One way to rewind to a most recent aspect of Twitch stream is by creating a clip of the scene.

To start a Twitch stream from the beginning, click on the Videos tab at the bottom right to access clips and videos on demand. The current live stream will be on top of the list.