Is It Illegal To Put Something In A Mailbox? What The USPS Wants You To Know 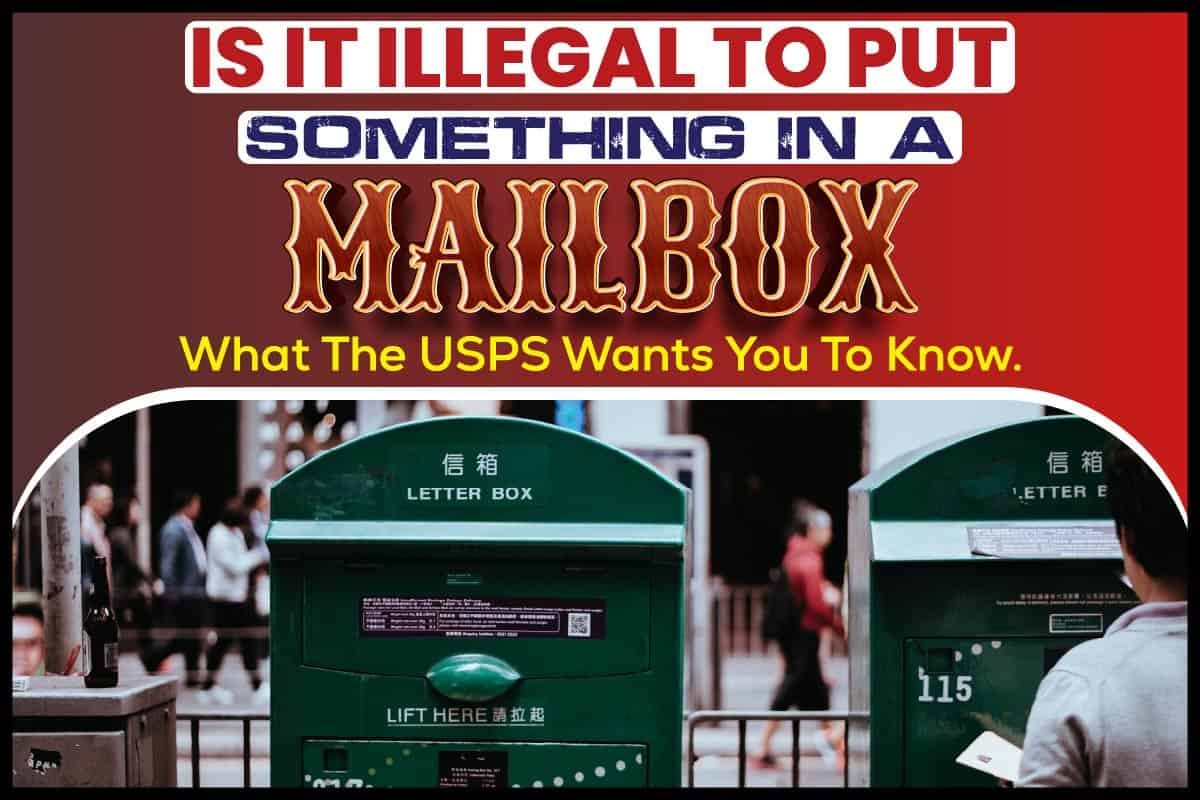 Many countries have mailbox restrictions while some others don’t. The U.S. postal service sets the rules concerning mailboxes in the U.S., even though you paid to have the mailbox. The mailboxes aren’t just random boxes you pick up. They have government specifications, which goes to show that mailing is taken seriously.

There are several things that the USPS wants you to know about mailbox access, including picking up your mail. That’s because people sometimes temper with their mailboxes illegally without knowing.

Is it illegal to put something in a mailbox?

Yes and No. If the mailbox in question is yours and postage has been paid for the item you’re putting in it, then you’re not doing anything illegal.

But if the mailbox isn’t yours or if you put in an item for pick up by someone who isn’t a postal employee, you’re doing something illegal.

The only people who should put things in or take something out of someone’s mailbox are the mailbox owner(s) and postal employees. It is illegal to put anything other than mail in a mailbox.

Therefore, it is illegal for a non-postal employee to place something in someone’s mailbox. If you receive misdirected mail and put it in someone’s mailbox, it is likely to be ignored, even if you shouldn’t do it. To ensure that it is delivered correctly, you must return it to your mailbox.

To avoid committing a crime, do not put anything in other people’s mailboxes unless you are a postal employee delivering legitimate mail.

The above explanation is the answer to the question, but there’s more you need to know. So, we urge you to keep.

Who Is The Actual Owner Of Your Mailbox?

Mailboxes have made it easy for businesses and individuals to send and receive letters and packages. Mailboxes are federal property. You pay for it, and technically, you own it because it is mounted on your property.

But it is still the property of the United States postal services because they make all the rules and regulations that guide the use of your mailboxes.

So, in simple terms, you own your mailbox, but the Usps makes and controls the rules and regulations that guide it.

This question is commonly asked because many people wonder why they paid for the mailbox and become federal property. In the United state, mailboxes are considered federal property to protect individuals against mail tampering and mail theft.

Making mailboxes government property makes it easy for the government to take legal action against individuals or groups that attempt to commit a postal crime. These crimes include mailbox vandalism, mail theft, and mail tampering. Heavy fines are placed on these crimes.

Several other illegal postal activities you may not know are illegal exist. It would help if you educated yourself, so you don’t end up committing a crime unknowingly.

It is also essential to know your rights, including when other people infringe on those rights. Here are a few things that are also illegal when dealing with mailboxes:

Placing mailers on mailboxes is illegal. You can’t put no-postage mailers inside mailboxes or hang them outside the mailbox. This action is considered tampering by the USPS, and its punishment is a heavy fine.

Hanging mailers may seem like a cheaper alternative to actual mailing, but the fine attached to the crime is way more.

You should display only marketing materials mailed through the United States Postal Service on or in mailboxes.

People try to cut corners because they know they can’t put things into people’s mailboxes. They try to put the item in the mailbox. As brilliant as they think they might be, they are still doing something illegal.

Every aspect of the mailbox is the sole property of the United States Postal Service. From the base of the post to the mailbox, the flag belongs to the United Nations postal service. The USPS is protected by federal law, and there are severe penalties for violating this law.

Why Is It A Crime To Place Mailers In Mailboxes?

You may think it is over the top to fine people for placing mailers on mailboxes, but it is considered illegal and punishable by law for many reasons. Unauthorized items may take up too much space in a mailbox.

If every business in town could insert mailers, the mailboxes would be complete before the homeowner’s regular mail arrived. The Postal Service also cares about the security of a person’s mail. As a result, only postal workers are authorized to place the mail inside and remove mail from mailboxes.

Postal Inspectors in the United States advise people to report anyone going mailbox to mailbox which is not a postal worker. The perpetrator may be unaware of the law, but they could also be attempting to steal mail.

This includes anything that defaces or damages a mailbox, internally or externally. Examples include:

Placing in the mailbox anything that can damage its content.

When you take something out of the mailbox:

We have answered the question, “is it illegal to put something in a mailbox?” Now, let’s talk about taking something out of the mailbox.

It is a federal crime to steal from somebody’s mailbox or steal a mailbox. It is also a crime to look at the content of a person’s mailbox even though you return the content without damage.

If you are charged with mail theft or obstruction of correspondence, you could face fines of up to $250,000 and up to five years in prison. The only exceptions are when you have the addressee’s permission to handle the mail or when you are legitimately dealing with the affairs of a deceased person.

It isn’t a crime when you mistakenly open a person’s mail. You could easily take it back to the person and apologize or put it back in the mailbox for the mailman to send it back to the right person.

In general, criminal tampering is defined as tampering with another’s property without permission and intends to cause inconvenience or worse to that person.

Mail tampering is simply stealing and the destruction of mail. The mail could be a letter or a package from a postal employee, a private mailbox, or a mail truck.

Mailboxes are the federal government’s property because the US Postal Service is a federal agency, and mail theft is a federal offense.

Depending on how the person committed the mail theft, you could face additional criminal charges such as assault, breaking, and entering. Suppose you had personal identifying information stolen, such as your name, date of birth, address, phone number, tax I.D. number, social security number, or driver’s license number. In that case, you could face identity theft charges.

There is also a possibility of facing state laws in addition to federal regulations. Not every state has laws against mail tampering, but a few states do.

Suppose the prosecution has probable cause that you tampered with someone’s property with the intent to cause significant inconvenience. In that case, you could be charged with criminal tampering in the third degree for mail tampering. In New York, this is a Class B misdemeanor punishable by up to 90 days in jail and fines.

So, we answered the question: is it illegal to put something in a mailbox. Now, you know what the USPS expects from you and what would be considered a postal crime.

Your mailbox allows you to send and pick up your letters and other packages that postage has been paid.