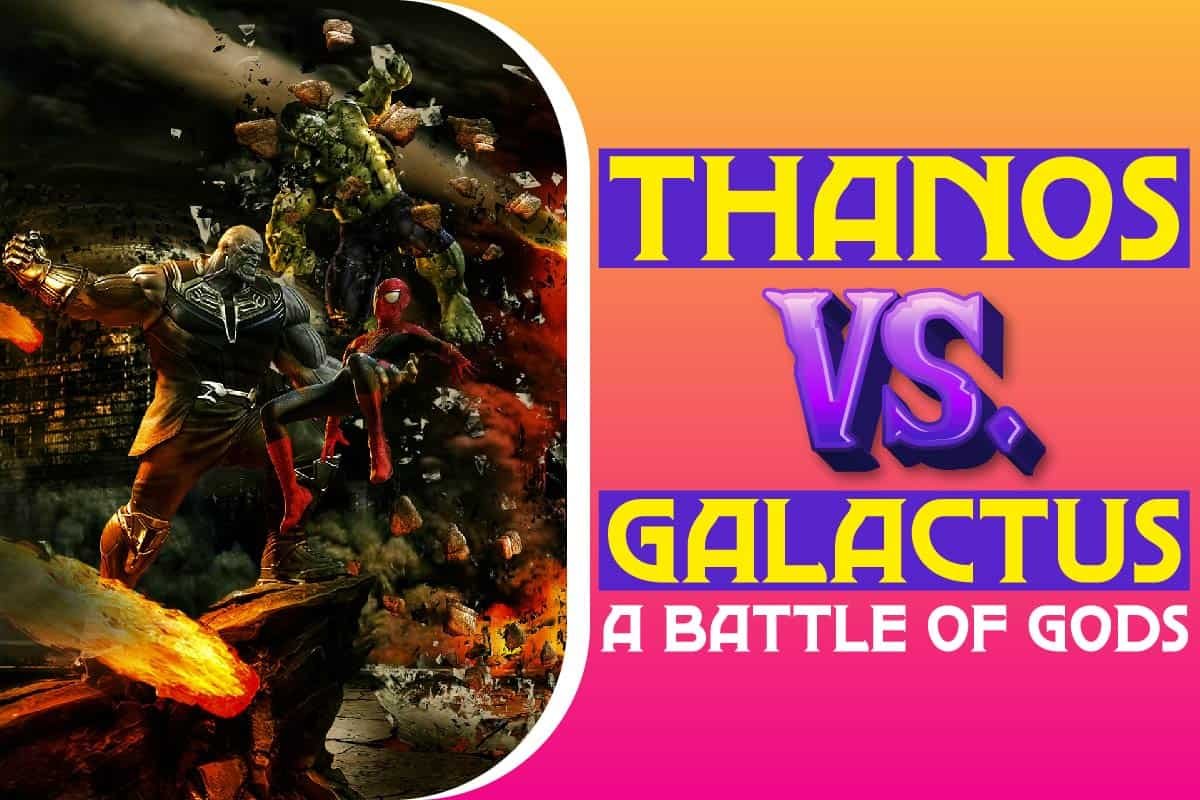 The MCU has entertained its fans for decades, not just by their fantastic choices of heroes but also by the intelligent selection of villains.

From Ultron, Loki, Ebony Maw, and all the other villains, the MCU has proven itself to be quite capable.

When it comes to villains, so far, there has not been any as devastating as the Mad Titan, Thanos.

His quest to wipe out half of life in the universe became genuinely terrifying when he got the infinity stones.

A matchup between Thanos, the Mad Titan, and Galactus the life bringer is something that every Marvel fan is dying to see.

The two beings have an extremely insane amount of abilities depending on the specific situation they are in.

When looking at Thanos, having the Infinity Gauntlet makes a big difference in his favor. In Avengers End Game, we got to see Thanos in action without the gauntlet, and it was spectacular.

Despite his size, he is very agile and was able to take on Thor, Captain America, and Ironman simultaneously, and he gave them a hard time.

To get a grasp of his power, we saw him catch Storm Breaker in midair, and he nearly killed Thor with it.

Thanos has an extraordinary amount of strength, and he can exert tons of force. This is seen when he thrashed The Hulk in Avengers Infinity War and cut through Cap’s shield made out of Vibranium.

He is also very durable in battle; he takes an insane amount of hits from the avengers to make a slight cut on his face.

He dropped a moon on himself and the avengers and survived unharmed. With the gauntlet, his power becomes limitless.

The stones give him the power to do anything he pleases, coupling such power with his genius intellect; Thanos is not someone Galactus would want to go against.

On the other hand, Galactus is the oldest being in the universe; he is older than our universe. His other name, The Devourer of Worlds, should tell you more about his reputation and capability.

Galactus draws his power from the Power Cosmic, which makes his power endless. When it comes to appearance, Galactus appears to humanoids about 26 feet and weighs about 18 tons.

However, he can change his body size and become even more extensive than planets. He appears to beings in a form they can understand, but most can’t perceive his true form.

Galactus is one of the most powerful beings in the Marvel Universe, along with the Celestials.

He can manipulate an incredible amount of cosmic power. He has shown an insane level of telepathic abilities.

In addition to this, he can restructure matter according to his will; he could destroy entire solar systems in an instant without breaking a sweat.

Since Galactus feeds on planets, his power to destroy is unlike any other in the Marvel Universe.

He can teleport himself and others across galaxies, creating an almost impenetrable force field around himself.

If all these weren’t enough, he is brilliant and possesses technology from before the creation of the universe.

Who Would Win The Fight?

Having looked at their abilities, we can see who would win should these two get into a fight. Galactus is by nature powerful enough to destroy entire solar systems even without gadgets or magic.

This means that in a one-on-one confrontation, Galactus could destroy Thanos without breaking a sweat.

Thanos’ hand-to-hand combat skills will not be of any help since he will get vaporized before he gets a chance to use them on Galactus.

Without the gauntlet, a match between Galactus and Thanos will be quick and decisive. Galactus is too powerful for Thanos to take without the stones. However, with the Infinity stones, the outcome of this matchup could be different.

Thanos stands a decent chance since the stones have so much more power than Galactus does. Thanos can reverse time with the Stones and kill the original form of Galactus.

The only problem is that Galactus can also manipulate timelines.

In the end, the only way Thanos can win this fight is by changing reality and stripping Galactus of his power to get him in a more vulnerable version or wipe him out of existence entirely. Otherwise, Thanos would lose this fight in a landslide.

The Origin Of Thanos

Thanos was a member of the Eternals, and he was born on the planet Titan hence the name; The Mad Titan.

The Eternals were beautiful beings with god-like abilities, but Thanos was born with deviant syndrome.

This made his skin purple and made him bigger than average, so his mother tried to kill him. He was a mild-mannered child and teenager who despised violence and killing.

His obsession with death grew over time from pictures, eventually leading to the slaughter of millions.

Eventually, he attacked his homeworld and killed his mother and millions more. He kept traveling the cosmos and killing to prove his love for lady death.

After killing his mother, he worked as a pirate for some time and later on embraced his murderous side we all know.

He met with Lady Death, who had been a significant influence on him from a young age, and she fed his obsession.

He kept growing his power and killed more and more to prove his worth to Lady Death. Thanos started getting bionic implants and studying illegal mysticism to create a weapon.

When his parents found out, his father exiled Thanos from Titan. He traveled the cosmos full of hatred and gathered an army of vicious aliens.

His defective mutation enabled him to absorb cosmic rays, which made him more powerful than the other Titans. At this point, he wanted to eradicate all life as a show of devotion to death.

In the Avengers’ storyline, he decides that life in this universe is overpopulated and needs balance.

He, therefore, decides to wipe out half of life on all planets. Initially, he did this manually while seeking the stones.

He wiped out half of the existing life forms with the Infinity Stones, but the Avengers time-traveled to stop him.

He now wanted to destroy the entire universe and rebuild it in his image, but the avengers intervened.

The History Of Galactus

Galactus is the sole survivor of a universe that existed before the big bang that formed our universe.

He was conceived billions of years ago on the planet Taa. Taa was technologically evolved, and he was able to discover the imminent destruction of his world.

His people were dying of radiation poisoning, so he decided to fly into the event horizon of the big bang. Instead, he was spared as his universe got decimated, and he merged with the sentients of the universe.

He drifted in space in a dormant state for billions of years until a watcher resurrected him. At this point, Galactus was a life form of pure energy.

He, therefore, formed a bodysuit to contain his boundless power and went into hibernation.

This hibernation allowed him to evolve into his final form, and it ended when he fed on the elemental energy of a nearby planet.

He then recreated a ship like his home world, and he called it Taa-2 hence began his rampage.

He started with uninhabited planets, consuming them to maintain his life and power, but his hunger grew. With time he began to destroy all worlds he came across since he believed himself to be a superior being.

He, later on, came across Zenn-La, and one of its inhabitants asked for the planet to be spared in exchange for his loyalty to Galactus.

This native was given power, and he became the Silver Surfer whose job was to scout for new worlds for Galactus to consume.

The Silver Surfer eventually helps the fantastic four save the earth when Galactus comes to consume it.

Galactus was killed in the comics using his weapon, the Ultimate Nullifier, but he was resurrected afterward to fight another villain.

Thanos and Galactus are some of the most destructive forces in the Marvel Universe. In most cases, their goals would be aligned since they are destroyers, but it will be a match to behold if they go toe to toe.

The specifics of who would win this fight will depend on the situation, but most scenarios will put the odds against the Mad Titan.

Galactus is a being of pure energy, and the only way Thanos stands a chance against him is if he has the infinity gauntlet.

The Marvel Cinematic Universe has been consistent in terms of its character creation and presentation.

The villains make the story, and Thanos was the best villain we have seen in a Marvel movie so far. Galactus would be a welcome villain, and his coming will make for a fantastic movie.