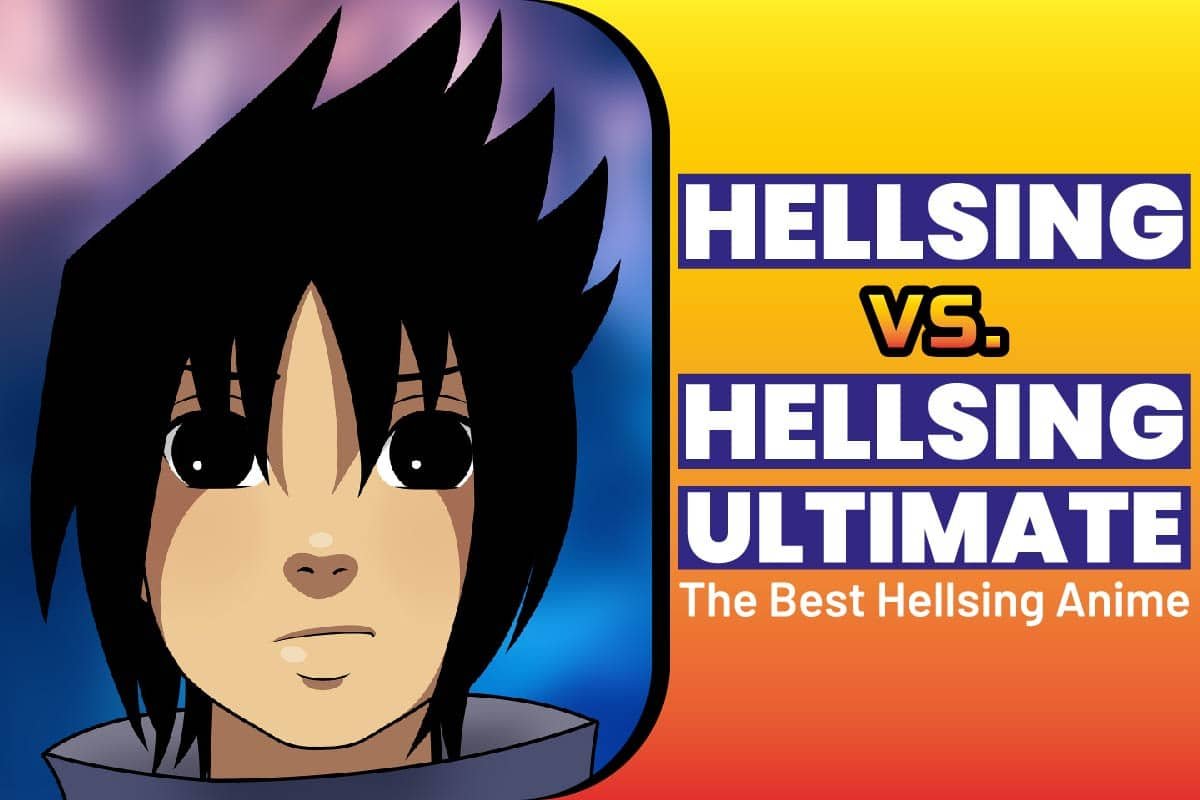 The belief in the existence of a supernatural world of vampires, werewolves, ghouls, demons, and so on is common in most teenagers and young adults.

Kouta Hirano connected to this need and created Hellsing, which turned out to be a bestselling manga.

Out of this success of a book came two movies, Hellsing and Hellsing ultimate, which we need to understand.

The goal is to eradicate all the supernatural beings that threaten England and its citizens. Let’s take a closer look at these movies to get the whole picture.

These two animations are two versions of one show derived from the same manga. Hellsing was the first version released back in 2001, having 13 episodes of about 20 minutes each.

Hellsing was the first on-screen adaptation of the manga, but it came out before it was complete. This complication forced the animators to take their story in a different direction in the middle of the series.

The second Version is Hellsing Ultimate, and it was released in 2006. This new version had ten episodes, each having a run time of between 40 and 50 minutes.

Hellsing ultimate was a reboot of the initial animation, but they intended to follow the manga more closely since it was complete by 2006. This made for a better story and plot in the Hellsing Ultimate that gave the series a win.

Similarities Between Hellsing And Hellsing Ultimate

The story is similar in the two versions, with a difference coming in at the later episodes of Hellsing Ultimate.

The beginnings are the same, with minor changes in the dialogue and specific details of the characters.

They both share principles on how the vampires get turned and the formation of ghouls. All the characters from the original movie are present in the Ultimate, which makes it a rerun with more details.

At the beginning of the story, both shows follow the manga, which makes them more similar. The creation of Victoria as a vampire in the first episode is shared, which establishes her as one of the main characters.

The overall setting, main characters, and plot are the same in both Hellsing and Hellsing Ultimate. The story is centered on the Hellsing organization and its operations.

This militant group has been trained for years to protect humans from supernatural beings like vampires and ghouls. The humans know nothing about the supernatural or the Hellsing organization.

Integra Hellsing is the organization’s leader, and she inherited this post from her father since it is her family that leads the organization. She is the master of Alucard Hellsing, the show star, and a mighty vampire.

The personality of each character has been maintained in the two shows. Alucard, the main character, remains interesting with his view of humans. Victoria is turned, and she joins the Hellsing organization.

She is still portrayed as a friendly, loyal and kind character that is out to do good for others despite what happened to her.

As she grows more powerful, we see a dark side in her in brutal fight scenes against her enemies.

Both Hellsing and Hellsing ultimate are excellent shows, but if it had to be a choice, it would be better to go for Hellsing Ultimate.

It is complete and more streamlined than Hellsing, which will offer you a better viewing experience.

Differences Between Hellsing And Hellsing Ultimate

These two shows have the exact origin, but they went in different directions along the way. Some significant differences could help you choose which one is worth your time so let’s get into it;

The overall character design is similar in the two shows, but the animation has a clear difference. The original show has a more classic and straightforward animation style despite the graphic content it showcases.

The difference in their time of creation has a mark on the animation. The animation in Hellsing Ultimate is much more explicit and more detailed. It has more gore and a much more horrific feel than the original Hellsing.

Victoria’s general look and character almost persist in both versions of the show, with her significant change being the color of her hair. How the show portrays her as a character is what differs.

In the original movie, it seems like she has a choice whether or not she wants to be a vampire since Alucard asks if she wants to go with him. She thinks about it, and he makes it clear that it is her choice.

In Hellsing Ultimate, he only asks if she is a virgin, and when she says yes, he shoots through her to get to the vampire priest. He then asks her if she wants to be turned; it feels a bit forced on Victoria.

The opening and closing theme music is different in the two movies. The original theme song did not set the mood for what you would go through watching the movie.

The change was an excellent addition to give the fans a better environment to enjoy the show.

The original series also takes a lot of time on Victoria and her development as a vampire. In the end, she becomes a very powerful agent herself.

In the Ultimate, she’s given less screen time, and her training is faster; she’s more of a joke in the new movie.

The story begins in both versions; an increase in Vampire attacks and the number of ghouls’ raises curiosity in the Hellsing organization. They, later on, discover that there is a special chip that can be used to create artificial vampires.

The events of the first half of Hellsing are covered in the first two episodes of Hellsing Ultimate. This is because they have longer episodes, and they fast-tracked many events from the previous show.

Hellsing tried to spend more time on each character, especially Victoria. It focused on her adjustment and training that got her to the powerful vampire we see at the end of the series. Ultimate focuses mainly on artificial vampires.

The movie’s first half is about figuring out the villains responsible for the vampires and the second part is an all-out war against the villains.

What Audience Do These Animations Speak To?

How good or bad a movie is, depends on the personality of the viewers. You could have hated movies, but they end up being some of the biggest projects ever, which proves that it is a matter of taste.

A fair warning, Hellsing is based on a horror manga, so you should expect a horror animation. It would be best for viewers that are into a darker tone and more violent animations.

Hellsing and Hellsing Ultimate are gothic, dark, graphic, and straight-up horrific. It gives an understanding of vampires and how they are in some ways linked to religion.

All these aspects are brought out in a series of violent and highly graphic fight scenes.

The rules of getting turned into a vampire are different in this show. For a character to get turned, they have to be the opposite sex of the vampire turning them, and they have to be virgins.

If a person is not a virgin, they become ghouls.

Ghouls are, in essence, vampires, but they don’t have free will, which makes them more like zombies. They remain as servants to the vampire until it is killed or they are killed.

This is a subtle highlight of morality and how it affects the transformation seeing as it works well for virgins. Alucard is the fan-favorite, and he is an ancient vampire with an interesting personality.

He finds everything done by mortals amusing and his reactions to such things make for some funny scenes. Despite the numerous jokes and other ridiculous scenes, this is not a movie for kids.

There are a lot of violent scenes that could be disturbing to young viewers. The kill scenes of ghouls and vampires are bloody and graphic, which is not something you want a ten-year-old kid to get exposed to.

The Hellsing series has been one of the most successful animations in the 21st century. It has been aired twice, as Hellsing in 2001, then later in 2006 as Hellsing Ultimate.

Hellsing was produced before the manga was complete, so it had to go off the rails at some point.

Hellsing Ultimate came out after the completion of the manga, which gave it more details and a longer story.

There are differences in animation in terms of quality because of the technology available at each movie’s creation.

The characters were maintained with their appearance and personalities. The story is a bit different because the movies focused on different aspects of the story.

Hellsing focused on the development of the characters, while Hellsing Ultimate was more into the whole picture rather than the specific character.