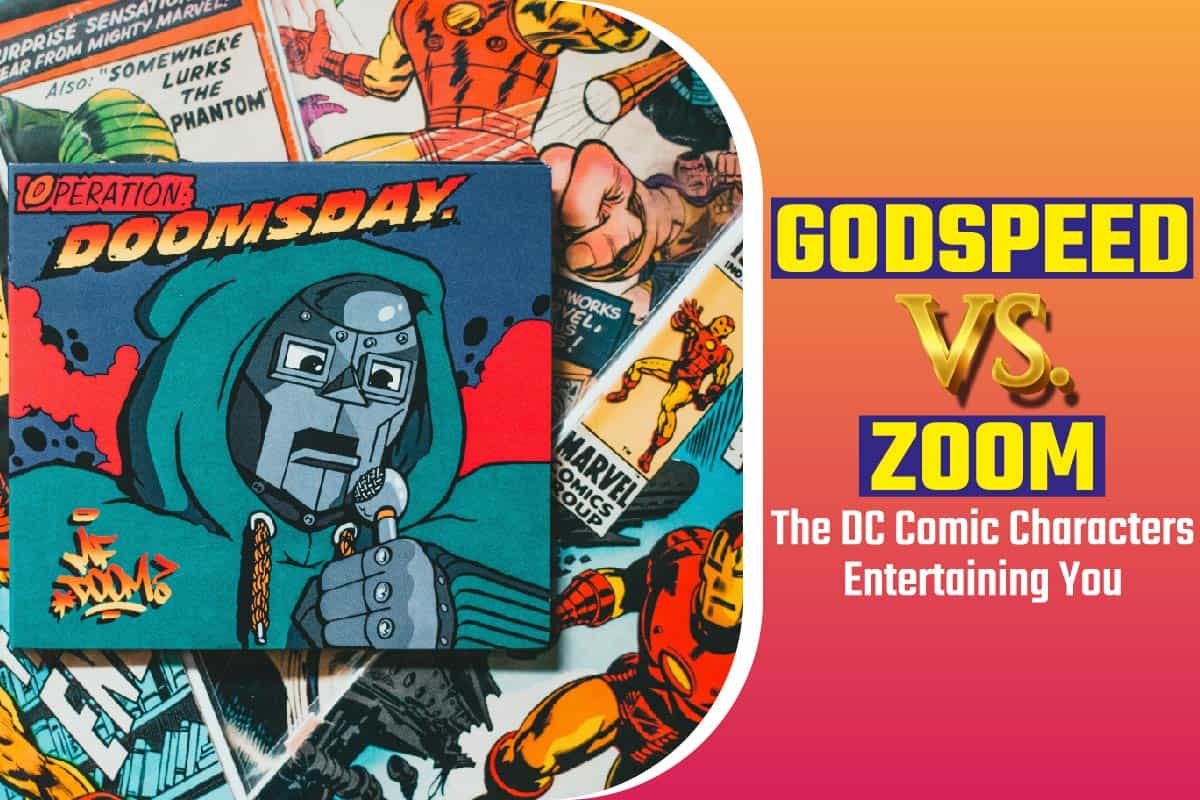 While both characters have their unique sets of abilities and superpowers, fans often argue about the faster of the two speedsters.

In this article, we enumerate a comprehensive list of the superpowers and abilities of Godspeed and Zoom. You can then decide for yourself who’s a more powerful character if you have no previous bias, of course.

Although both of them have exceptional abilities, one character tops the other in some areas. Although deciding who the overall best is may be subjective, we can take them head to head in some areas.

Most people consider Godspeed one of the fastest speedsters in the DC Universe. Unfortunately, Flash and Wally captured him.

So, that title seems reserved for Wally West at the moment. However, it doesn’t take away the fact the Godspeed was an exceptionally fast speedster.

Zoom, on the other hand, can’t move at supersonic speed. However, he can still move fast by altering time and making others move slowly. Godspeed lacks this ability. So, physically Godspeed is faster than Zoom. However, Zoom can outrun him by changing time.

Although they both have agility, superior force, and swift healing time, Godspeed can create clones of himself.

Godspeed is also intangible and can waltz through physical barriers. However, Zoom is not intangible, and this lack of intangibility is one of his most significant weaknesses.

Perhaps you’ve never followed DC comics, or you’re late to the party. It would help you get a brief background of the two characters before we go head to head on their abilities. Who is Godspeed, and who is Zoom? Grab some popcorn and continue reading.

Godspeed is an alias for August Heart, who was a cop at the Central City Police Department. He finds a close ally in Barry Allen in the same police department. The story has it that Godspeed lost his brother Jorge at some point to an unknown assailant.

Godspeed’s desire to avenge his brother’s death became his primary motivation in fighting criminals in Central City. However, this drive takes him to levels where he becomes a problem to the peace and security of Central City.

However, the lightning transformed Barry into the Flash, an event Godspeed witnessed. While pursuing a criminal gang in Central City, lightning from a Speed Force storm struck Godspeed, empowering him with unique abilities.

Godspeed could steal the speed of other speedsters, killing them in the process. Eventually, he improved his skills to the point where he could steal speed without killing a speedster.

August could duplicate himself at any given time with his new godlike speed, creating the impression that he and Godspeed were two different people.

Zoom is an alias for Hunter Zolomon, a speedster who had a rocky relationship with his parents. Hunter’s father had murdered his mother the day before he departed for college before the police shot him after refusing to surrender.

Zoom became intrigued with understanding the criminal mind after this encounter and went to study criminology and psychology in college. Zoom later joined the Federal Bureau of Investigation with his girlfriend Ashley, whom he married soon after.

During a massive jailbreak, Gorilla Grodd attacked and injured Zoom, leaving him paraplegic from the waist down. Zoom requested that Wally utilize the cosmic treadmill in the Flash Museum to travel back in time and prevent the catastrophe from occurring.

Wally turned down the offer, claiming that he couldn’t risk changing the timeline. Wally’s refusal enraged Zoom, believing that Wally had turned down his request because he’d never experienced personal loss.

In a frantic attempt to use the cosmic treadmill himself, Zoom broke into the Flash Museum. Unfortunately, it was a complete failure. The event resulted in an explosion that destroyed the museum.

However, Zoom soon discovered that things were not as they seemed. Hunter’s connection to time was thrown out of whack by the blast at the museum.

According to Jay Garrick, this may have created a time warp, causing Zoom to disconnect from the current timeline at all times.

As a result, Hunter Zolomon could slow time down with relation to himself, even bringing it to a complete standstill while moving correctly through it, creating the impression of incredible super speed.

After duping Barry Allen and Wally West into destroying the Force Barrier, Zoom obtained access to the Speed Force.

Godspeed can travel at superhuman speeds. At first, he had absorbed so much Speed Force that he outpaced the Flash. Then, however, the extra power was quickly reclaimed by Flash and Kid Flash.

Godspeed’s speed allows him to generate so much force that a single blow may decapitate a man, and a single poke of his finger can knock someone out.

Godspeed’s body can withstand the strain of traveling at high speeds without growing weary or weak.

Godspeed possesses extraordinary agility, balance, and bodily coordination. This ability allows him to navigate with ease, even when going at high speeds.

Godspeed’s reflexes have been enhanced to superhuman levels, allowing him to react to threats and happenings fast.

August, like all other Speedsters, can recover from injuries much faster than the average human.

Godspeed increased significantly, so much so that he could lift and dangle a grown man well above his head with one hand.

August has durability levels that are well above average.

For other speedsters, traveling at the speed of sound could make them miss actual events as they run.

However, this wasn’t the case for Godspeed, as he possessed enhanced senses by the speed force, which enabled him to perceive the world faster.

Godspeed can become intangible and pass through objects by vibrating molecules on an atomic level. He has to do this at the right frequency.

Some other Godspeed’s unique abilities include:

Godspeed has a massive capacity to deceive people. He proved this when he deceived everyone at STAR labs, including Barry Allen, by acting as Flash’s partner.

Godspeed can steal the speed of other speedsters, create, construct and even be at two places at a time. All of these are what zoom doesn’t know.

Just like every other speedster, Godspeed has his weaknesses. Chief among them is the instability of his powers.

When Godspeed keeps a clone for an extended period, he experiences pain and recombines with his clone by the speed force.

He experiences even more pain when he steals the speed of another speedster. This pain is more significant than that experienced when he clones as he almost died at his first attempt of stealing speed.

Zoom can alter his own time. He can use this talent to move at “speeds” that rival Wally West’s, and in most cases, “faster.” Zoom appears to control the rate at which time flows around him, allowing him to travel faster or slower than everyone else.

Zoom can make himself faster than the Flashes because he can alter time relative to himself. Zoom is unaffected by friction or other issues that other Flash-type speedsters face because they move at supersonic speed.

Hunter’s reflexes are substantially more potent than the average person’s. This ability allows him to react rapidly to dangers and situations while also experiencing the world in slow motion.

Zoom’s body can sustain the pressure of traveling at superhuman speeds for extended periods without growing exhausted or weak.

Zoom, like all other Speedsters, can recover from injuries much faster than the average person.

Zoom is significantly more robust than any human, sustaining tremendous kinetic impact pressures that would easily crush or kill a human without suffering any external or internal injuries.

There are limitations to Zoom’s abilities. Zoom, at one point in his career, found vibrating his speedster molecules impossible. As a result, he’s not intangible, and he can’t phase through solid matter. So, he needs to run around physical blockades to get through.

Godspeed, with real names August Heart, was a member of the Central City Police department and a friend of Barry Allen. His superpower abilities include his exceptional speed, superhuman stamina, superhuman agility, superhuman reflexes, amongst others.

Zoom, also known as Hunter Zolomon, is a speedster from a rocky home with his father murdering his mother a day to his departure to college. His special powers include time-altering ability, exceptional reflexes, special force, and swift healing abilities.