How Long is a Soccer Game? 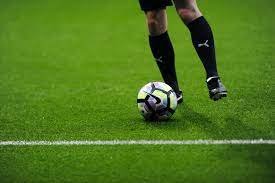 If you’re going to watch a soccer game for the first time in your life, you must be wondering how long a soccer game is. So, let us help you with that.

A typical soccer game is supposed to last 90 minutes which is split into two halves of 45 minutes each. At the end of the first half, there’s a 15-minute halftime break in which players can rest, drink fluids, or seek advice from their coaches.

However, a soccer match does not always last for 90 minutes. What adds to the time and why do different soccer leagues have different time limits will all be answered here.

A referee is allowed to add any number of additional times of the play at the end of each 45 minute half. This is often referred to as ‘Additional Time’ or ‘Stoppage Time’ and it is meant to compensate for any time lost during the game due to a number of reasons such as:

The fourth official holds up the board on the sideline to let the players, coaches, and audience know how much time is added. The referee blows the whistle when the match ends.

What Happens When a Soccer Game is Tied?

When a soccer game ties, there’s more than one option for what happens next. In some leagues, when the scores level at the end of the game, it is called a draw, and each team is awarded one point.

In some leagues, when the game ends in a tie, it may go straight to the penalty shoot-out.

In a FIFA World Cup, a game continues with 15-minute periods of overtime and then moves to a penalty shoot-out.

How do Penalty Shootouts Work in Soccer?

When a game ends in a tie, it is followed by overtime in most leagues.

If a game remains tied after the end of the overtime, it may move to penalty shootouts to determine the winner.

Each team sends its five best players to line up to take the penalty kick. Each team then alternately sends one player to the penalty line to shoot the ball against the goalkeeper of the opposite team.

Whichever teams make most shots out of the five kicks wins the match.

If the match remains tied after the five penalty kicks, both teams continue to send players to take penalty kicks until a winner is found.

How Long is a Professional Soccer Game?

Professional soccer games around the world last for 90 minutes with a 15-minute halftime. A match is played between two halves of 45 minutes each.

During 15 minute break time which is also called half time, players can rest, drink fluids, take advice from their coaches, etc.

This is the same for both men’s and women’s soccer matches all around the world.

The time is the same for the FIFA world cup, championship game, and other leagues and cups— they are all for 2 hours on an average.

How Long is the College Soccer Game?

National college soccer match (NCAA) is also 90-minute long with a 15-minute halftime break. If there’s a tie at the end of the game, 10 minute overtime is played.

Some of the NCAA rules relating to the soccer game are:

Two 10-minute overtime periods will be played in which the first team to score first in the overtime wins the game.

In case of a second additional time, teams will switch the ends of the pitch.

The interval between 90 minute period and overtime is 5 minutes.

A timeout may be used after the end of the 23rd for live telecasts but it should not be more than 2 minutes.

How Long is a Youth Soccer Game?

The length of the youth soccer game differs as the rules are also not the same as the professional games. The time frame of a soccer game depends upon the age groups.

Under 8- Four quarters of 12 minutes

Under 6- Four quarter of 6 minutes

Another difference between youth soccer and professional soccer is that even the number of players can be different from the usual 11 players and the number of substitutions may be higher than the usual 3.

How Long is a Soccer Game on TV?

A Soccer game on TV lasts around 2 hours. However, it could last 30- 40 minutes more if there’s overtime.

Whereas, College soccer games are shorter than professional ones since they have shorter overtime and a golden goal rule.

When Does the Clock in Soccer Match Stop?

The clock in a soccer match does not stop at any point. Even if there’s a huge delay due to replay, review, or any other reason. The time is made with the extra time added at the end.

What are the Major Fouls in a Soccer Match?

The major fouls in a soccer match are:

Conclusion: How Long is a Soccer Game

We hope you got the answer to your query ‘How long is a soccer game’ in this guide. The answer is 90 minutes which is split into two halves of 45 minutes each with a 15 minutes halftime break.

However, the time frames are different in each tournament like professional soccer, college soccer, or youth soccer.