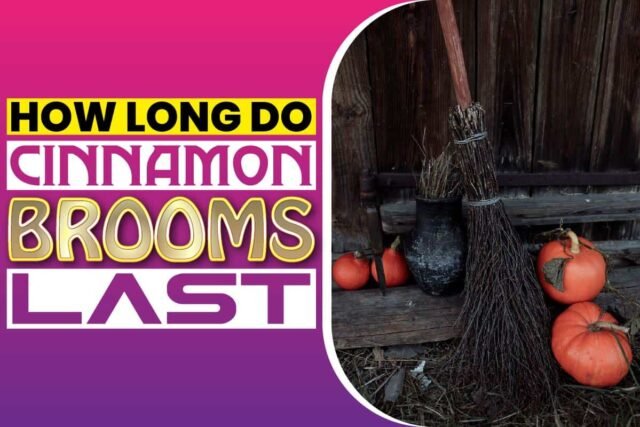 Usually, cinnamon brooms hit the stores between late September and early October, just before Halloween. People often get torn between buying a new cinnamon broom for each holiday or using one broom for all the different holidays.

The dilemma with buying one broom for each holiday is how long it can retain its cinnamon scent. The scent fades with time, and for most people, the broom is no longer valuable when it loses its scent. So, knowing how long a cinnamon broom is likely to last is essential, especially to first-time buyers.

How long do cinnamon brooms last?

Cinnamon brooms can last for a considerable amount of time. But you can refresh an old cinnamon broom instead of throwing it away when it loses its scent.

Generally, the bristles of a cinnamon broom last longer than the scent. So, even when the broom loses its scent, you may use the bristles for other purposes if you don’t want to refresh the broom.

Keep reading for more on this topic.

What Are Cinnamon Brooms?

Cinnamon brooms are decorative brooms mainly used during holidays. They are brooms made of pine straws and cinnamon oil, giving your home a pleasant and welcoming smell.

Although cinnamon brooms have other uses, most people buy them for their pleasant fragrance.

When it comes to decorating for the holidays, cinnamon brooms can fit into almost any holiday from Halloween to New Year.

As an air freshener:

The pleasant fragrance from cinnamon brooms is why most people love and use it. One broom can spread the scent of cinnamon throughout your house.

To ward off negativity:

According to different accounts, cinnamon brooms prevent negative influences from invading your home. People put cinnamon brooms just above their door frames to ward off negative energy and influences, giving room for only positivity.

Some people believe that these pleasant-smelling brooms bring good fortune, especially in business and money matters. So, it is no surprise that some business owners hang cinnamon brooms in their business places.

Where Can You Find Cinnamon Brooms?

Cinnamon brooms are more common than you think. You can find them in many physical and online stores. They are available in Walmart, Trader’s Joe, Etsy, and several other stores.

Also, you can make your cinnamon broom at home. It isn’t difficult to achieve. A quick dash to the supermarket in addition to a few household items, and you’re ready to go.

How Much Do Cinnamon Brooms Cost?

Cinnamon brooms are affordable. The prices often depend on the size of the broom and the store you’re getting it at. At Trader’s Joe, you can get a small cinnamon broom for less than $1. The price ranges from $0.99 to $39.9.

What Do You Need To Make Cinnamon Brooms At Home

The items you need to make cinnamon brooms by yourself are things you can quickly get. They are:

How To Make Cinnamon Brooms At Home

Here is a step to step guide to making cinnamon brooms by yourself:

Step#1: Dip your paintbrush into the glue and run it over one side of your straw whisk broom.

Step#2: Layout a piece of wax paper on the floor or a table and place the glue-covered whisk broom on the paper.

Step#3: Sprinkle a considerable amount of ground cinnamon on the broom. Then leave it to dry, preferably overnight.

Step#4: Repeat steps one, two, and three on the other side of the whisk broom.

Step#5: Put a few drops of cinnamon oil on the edges of the broom without glue. This application would allow the bristles to absorb the cinnamon oil properly.

Step#6: Use a plastic bag to seal the broom. Leave it for one to two weeks.

Step#8: Place the decorative bow or any other forms of decorative material on the broom’s handle.

How To Refresh Your Cinnamon Brooms

Refreshing your cinnamon brooms is better than throwing them away. You can use your broom multiple times before you finally dispose of it. Here are a few ways to refresh your broom:

If you notice your cinnamon broom is losing its cinnamon scent, you can try using the steaming method to refresh it. Pass the broom over the steam of boiling water.

This process allows the broom to absorb water vapor, making room for the pleasant cinnamon fragrance to come out again. You can do this a few times before it stops working.

This process is similar to using steam. The only difference is you would have to rinse the broom with the boiled water. After rinsing, you must allow it to dry. You can try this process on your cinnamon broom a few times before it stops working.

Applying cinnamon oil to your cinnamon broom can restore it to what it once was. The best time to do this is when the two previous methods become ineffectual.

To apply cinnamon oil on your broom, wear a pair of latex gloves. Do this to avoid harming your skin. Pour cinnamon oil into your gloved hands, rub together and massage into the broom. Do this until the broom is wholly coated with cinnamon oil.

Spread old newspapers on the floor and place the oil-coated broom on it. Leave it there for a few hours. Then use old newspapers to clean the broom so that it absorbs more oil. After this process, your cinnamon broom would go back to filling your home with its pleasant smell.

Can You Use More Than One Cinnamon Broom In Your Home?

There are no rules for how many cinnamon brooms you can have in your home. Whether you’re using it for decorative purposes, for its smell, or to ward off negativity, the number you use is dependent on you.

You can buy more than one for different parts of your home. You may choose to place one in every room or every corner of your house. It is totally up to you.

Must Your Cinnamon Broom Be On Display?

No, it mustn’t. Displaying your cinnamon broom or not is dependent on why you bought it. If you bought it for cosmetic reasons, it wouldn’t serve its purpose if you didn’t display it in your home.

If the reason you got it is to ward off negativity, then the best place is at your doorstep where possible negativity may come in from. Isn’t that right?

However, if you bought it for its air freshening abilities, you don’t need to put it on display. You can, but it isn’t compulsory. You may choose to keep your hidden places that would allow for proper circulation of the scent and keep your cinnamon broom there.

Are Cinnamon Brooms Safe For Your Pets?

Generally, cinnamon brooms are safe for pets. Cinnamon is considered safe for dogs, pets, horses, etc. So, if you’re worried about whether your cinnamon broom would negatively affect your pet, you can rest easy.

The only times when cinnamon can be toxic for your cats or dogs is if they consume large quantities in higher concentrations. So, the best thing to do is keep your cinnamon broom where your pet can’t put it in their mouths.

There are also instances when people have said that the smell of cinnamon wards off their cats. Cats avoid strong aromas, but this doesn’t make the source of the smell toxic to them.

Cinnamon brooms are useful. Whether you’re using it for its smell, for festivities, for its spiritual implications, or all three, you would get your money’s worth one way or the other. You can use it for as long as you want, provided you can refresh it when necessary.

Shoe Size Comparison Between Brands; Getting The Right Shoe Size

Shoes are a big part of today’s fashion. Having amazing shoes will make you stand out, but there is more to shoes than looks....