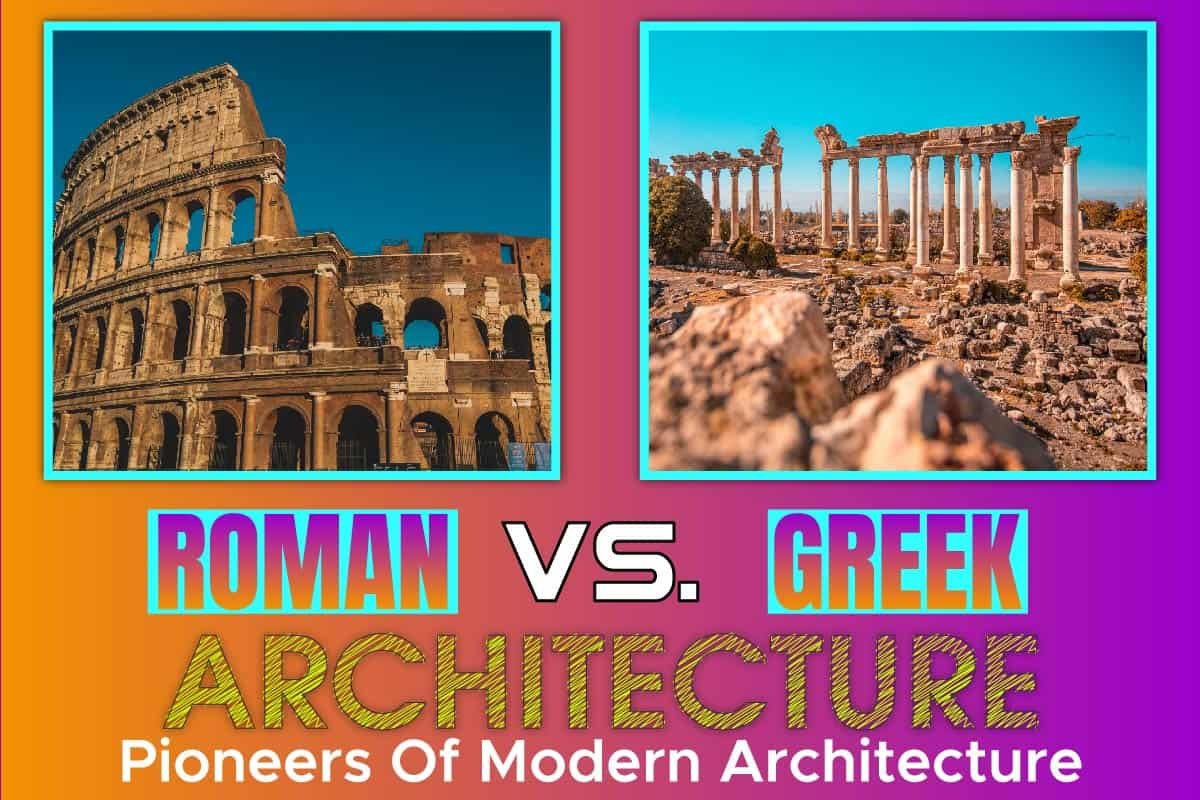 Thinking about architecture, the first civilization that comes to your mind is Greece, followed by Rome.

These are the ancient civilizations that started the modern methods of building and the most elegant architectural designs.

This is reflected in the modern cities of Rome and Greece in their beautiful museums and hotels.

What are the distinctive characteristics of these ancient architectural geniuses, and how do they differ from one another? Let us get into the details;

Roman architecture historically came after Greek architecture; thus, most of it was inspired by the Greeks.

Greek architecture was focused on looking good on the outside, but Roman architecture improved since it had visual appeal both inside and outside. Romans experimented with concrete, domes, and other new building forms for better looks.

Greek architecture has made the most impact on the modern world of all the ancient architectural styles.

The Greeks lived in the Greek Peninsula, which the Mediterranean Sea bounds on one side and the Black Sea on the other. Marble was the chief material used for building by the Greeks; thus, it involved a lot of carving.

The Doric order was a canonical order of Greek architecture that later on was embraced by the Romans. This order is mainly known for the simple circular capitals they had on top of their columns.

This is the earliest and simplest order with a smooth, surfaced column. The column dropped straight into the base of the building since it had no base. At times architects added moldings to the capitals of the columns to enhance visual appeal.

This was the order with the narrowest columns of all three. Their use of volutes distinguished this order. A volute is a scroll-like spiral ornament that architects put on the capital of the Ionic column.

These columns stood on a base that separated the length of the column from the platform or stylobate.

Architects often decorated the cap on Ionic columns with carvings made of marble, stone, wood, or plaster.

This is the last of the three classical orders of ancient Greek architecture, and it is the most ornate order.

This style was characterized by slim fluted columns and columns decorated with acanthus scrolls and leaves.

This was an order with free minds; thus, there came up many variations. Nevertheless, it was a widely used style in the construction of temples in both Greece and Rome.

This was the age in which Romans integrated mathematics into the building of the columns for better facilities.

The Roman republic was founded in 509 BC, and it fell in 476 AD. Romans were conquerors; thus, their empire covered over two million square miles at its peak and touched three continents.

This stretched and lasting influence is still seen in art, politics, science, and architecture. For example, the ancient Romans improved on most Greek architectural ideas, but they made significant advancements in engineering, sanitation, and technology.

The use of concrete allowed their structures to be sounder hence the numerous museums with Roman history.

Roman architecture was characterized by several standard components; the arch, the vault, the dome, and the use of concrete.

The Romans improved on the existing Etruscan Greek arches, and they used these arches frequently as a structurally sound, durable, and efficient way of building.

As a result, arches were integrated into almost all roman construction projects for both beauty and quality.

The arches were improved to increase stability while reducing the cost since it is cheaper than building a complete wall.

Most Roman structures, including the Roman aqueducts, the coliseum, and other enormous structures, had arches.

The arches could support a lot of weight, and this made their usage virtually limitless. This constant use has made a permanent mark, as seen in the continuous use of arches in modern construction.

Roman architects also made extensive use of vaults to add splendor to their projects. Vaults are a series of extended intersecting arches that are structurally dependent on one another.

Vaults were used in large buildings or other smaller buildings that were to be aesthetically enhanced. The grooves and ridges were made visible, and they improved interior building aesthetics.

The dome is one of the most remarkable feats of engineering in the ancient architectural world. The dome over the Parthenon in Rome stood as the largest dome in the world for over 1000 years.

These large domes are made of molded concrete, and some had holes at the center referred to as an oculus.  This hole was meant to let in natural light since the domes were primarily put in large buildings.

Domes are more visible, artistic, and beautiful from the interior like most Roman architecture was.

As a result, these designs have become popular in most of today’s buildings showing just how much Roman architecture has shaped the modern world.

Another advantage the Romans had when it came to construction was the quality of building material.

For example, Romans figured out how to make concrete harder by adding volcanic ash to act as a binding agent.

They used concrete on buildings, roads, bridges, and even underwater construction, where they protected it with pipes until it hardened.

This hardened concrete gave architects much more freedom in their designs since it could support more weight.

Differences Between Greek And Roman Architecture

Greek and Roman architecture share a similar origin, but a few aspects distinguish between the two. Here are the significant differences;

The Romans were more decorative in their architecture as compared to the Greeks. For example, Romans used combinations of Greek columns to make columns that were much more beautiful and elegant than those made by the Greeks.

On the other hand, Romans made sure their buildings were beautiful on the inside and the outside. For example, Romans used vaults, domes, and arches to improve their buildings’ elegance.

The Greeks used marble, plaster, wood, and stone for construction. However, Greek architecture came before the perfection of concrete; thus, they rarely used it in their work.

These limited materials meant that they could not build domes or arches; hence they had plain buildings.

The Romans, on the other hand, preferred to use concrete as their primary building material. The Romans made concrete harder by adding volcanic ash to it.

This allowed them to make bigger and more lasting buildings than the Greeks ever did. Concrete’s ability to bear a lot of weight also allowed the use of arches and domes, which made for more delicate buildings in Rome.

The Greeks made columns with the sole purpose of supporting the roof of the building. There wasn’t any major form of artistic design or meaning in the Greek columns.

Romans, however, integrated a lot of art and meaning into the design of their columns and even entire buildings.

They either craved their gods with cement or wrote messages and carved patterns into their work.

Similarities Between Roman And Greek Architecture

Roman architecture was mainly derived from Greek architecture; thus, there are many similarities between them.

The Greeks and Romans are the pioneers of modern architecture. The Greeks started simple ideas, and they were later embraced and refined by the Romans, who made a much more significant impact due to their military influence.

Over the years, Romans improved and eventually broke away from the Greek designs. Romans added more features such as domes, vaults, and other decorations to their buildings.

In addition, using concrete allowed the Romans to be more flexible in their designs.  The Romans and Greeks have made a significant impact on today’s architectural field.

Other civilizations, such as the Egyptians, also made impressive feats, but none will be remembered more than the ancient Romans and Greeks.