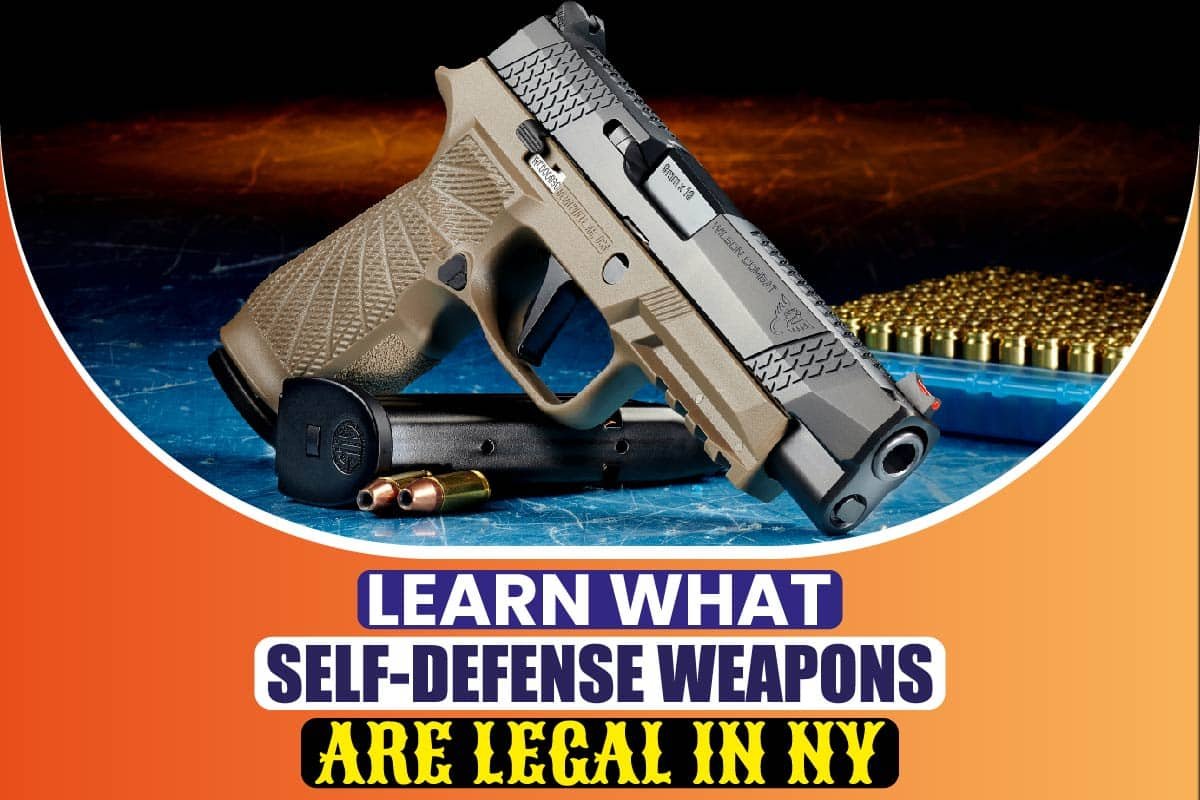 NY is essentially a liberal state in so many aspects, and these include self-defense weapons. The state has limitations and guidelines for what its citizens can and cannot own or use when it comes to weapons.

The state’s guidelines and limitations call for its citizens to get creative in defending themselves legally. So, if you are looking for legal self-defense weapons you can use in New York, continue reading.

If you think you need to own a self-defense weapon and are unsure which weapon is legal in New York, see the list below.

New York is very tough when it comes to owning firearms. Although they don’t explicitly prohibit people from carrying it around, they only issue owners permits for concealed carry.

Nobody can carry a firearm without a license. Owning a gun is legal, but you cannot own it or have it with you without a license. So, if you want to buy a gun, you have to talk to an experienced attorney to avoid getting arrested.

In New York, it is legal to go out with pepper spray. However, some buildings and establishments and certain scenarios where your pepper spray has to remain concealed.

While a knife can help you defend yourself, don’t take the weapon lightly. New York does not allow people to carry knives around openly. You cannot even wear it outside of your clothing, even if the blade of the knife is not exposed.

If any portion of the knife you’re carrying is visible, it is considered carrying it out in public. This law doesn’t apply to people who use a knife at work, like military or on-duty ambulance drivers.

Public use or possession of a knife with a blade of 4 or more inches doesn’t matter if any part of the weapon, including the blade, is concealed or visible.

You can use the tactical pen as an alternative to carrying a knife when it comes to self-defense. You can use this pen in scenarios where knives or a Kubotan is not ideal. It can penetrate and injure the target’s body.

While a tactical pen looks like the normal pen and comes with an ink cartridge, it also comes with a pointed titanium tip, which the manufacturers designed to be a self-defense weapon.

Some of these pens are heavy enough to hit your attacker with or to break a glass. They are small and easy to hide. Tactical pens are a popular choice for people who don’t want to carry a knife or a gun for self-defense.

The use of tactical pens is 100% legal in all states in the United States of America.

Stun guns are a great self-defense weapon for anyone. Also referred to as electroshock weapons, stun guns use up to 50,000 volts and several milliamps of electricity to stun the attacker.

Stun guns are also loud and bright, which means that demonstrating one may turn an attacker away. However, if the attacker continues to come towards you, hold down the button and jab the person with the live end of your gun.

The gun’s electricity will course through your attacker’s body and disable them for a while. Don’t let the idea of thousands of volts scare you. Voltage from a stun gun “should” not kill. So, you won’t permanently harm your attacker, as long as they don’t have a pacemaker.

If you are thinking of getting a walking stick sword, don’t even waste your time because they have weak blades and are not legal. The walking canes and sticks are longer than batons, which mean you can do a lot with them to defend yourself.

Civilians and law enforcement personnel are allowed to carry tasers, but there are different types of tasers. If you want to buy a Taser, make sure you buy one that is designed for civilians.

The taser was designed for civilians to hold a shock for about 30 seconds. Within 30 seconds, the weapon holder will be able to immobilize their attacker. After this, they can drop the taser and run away.

Baseball bats can be used to defend yourself from an attacker, as long as you use them right. Try practicing how to use it for self-defense first. It can also leave serious damage to your attacker.

A single tap to your attacker’s head, and they are down for the count. A baseball bat is not a casual self-defense weapon, and it is not something you can carry down the sidewalk.

However, if what you want is easily obtainable and can inflict damage, then a baseball bat is your perfect weapon. Baseball bats are also legal in NY as long as crazy stuff like spikes is not attached.

Flashlights with a heavyweight metal body can be hefty. The metal body can make them a good self-defense weapon. Some flashlight models also have an aggressive face that can damage even more when you hit an attacker.

Also, you do not even have to strike your attacker with a flashlight to defend yourself. Light is a good deterrent, and criminals would rather attack in dark locations. You can use light to blind your attacker.

You would want to make sure that you buy a very bright flashlight. When your attacker is blinded, you can decide to run or strike them before you escape the situation.

Make sure the flashlight you buy is of high quality. A flashlight that costs a dollar cannot work for you in this situation.

New York state law does not allow citizens below 16 to possess an air gun, so consider this before buying for your teen. Air guns are commonly used as toys, target shooting, and “beginner” guns for kids.

These weapons have also been used during the war since the 18th century. The modern designs are even better, even though most are only good for squirrels. However, you can use some to take down dogs and deer.

Air guns are great for self-defense. You can use it to take your attacker down and run away from the scene.

What Guns Are Considered Legal In New York?

There are lots of legal guns in New York, but not in other states in the USA. New York allows its citizen to own long guns, including rifles and shotguns, without asking for a license or a permit.

You can carry a pistol without people around you know you are carrying it. However, you cannot hide the fact that you are carrying a long gun from people. So if you are wondering why the law is different, that explains it. It is not the same in NYC.

Can I Shoot A Pistol In The State Of New York Without A Permit?

You cannot shoot a pistol or possess one in the state of New York without a permit. You must obtain a permit to own and use the weapon. As stated above, unlike long guns, to use and shoot smaller guns, you need a permit.

You need a permit to own and use small guns such as a pistol because of the element of concealment the weapons offer.

While nothing will stop you from using your pistol in NY, if the law catches you shooting it or holding it without a permit, you could get yourself into very big trouble with the state.

If an official catches you possessing or using a weapon, they will ask you to show them the permit you have for the weapon. If you are unable to provide the permit, then you are in for serious legal troubles.

Finding the perfect self-defense weapon is not difficult, but using one in New York and even other states is a different issue. You cannot use certain guns without a permit. And you have to use legal weapons.

If you don’t want to use a gun, you can use other self-defense weapons mentioned in this article to get you out of danger without killing someone. If you live in New York, be smart about defending yourself.