Is Taiwan Part Of China? Uncovering A Political Controversy 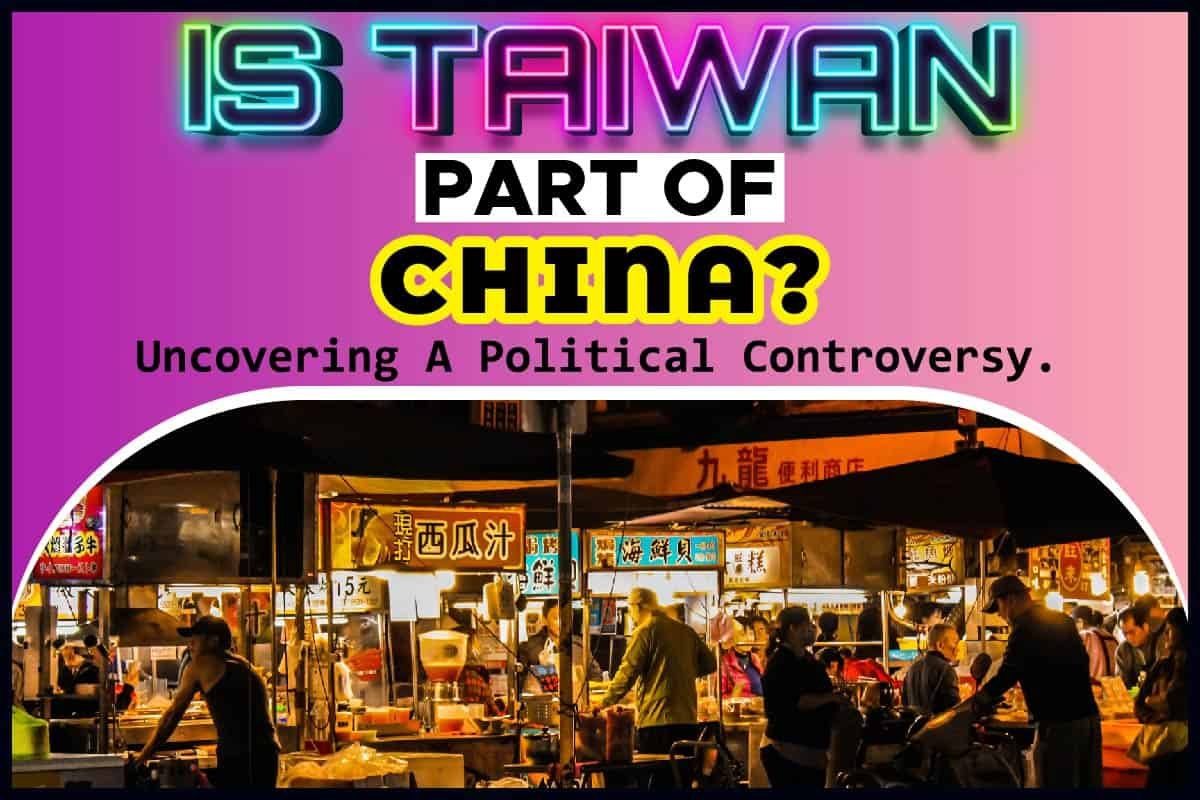 If you take a close look at the wide belief that China and Taiwan share Taiwan and mainland China are two halves of the same country’s territory, you’ll find a good reason to affirm that Taiwan is a part of China.

As a visitor, you will notice how distinct Taiwan is from mainland China regarding legality and visa requirements. Also, considering the current political status of Taiwan from a Taiwanese perspective, you may have a contrary opinion to the fact that Taiwan is a part of China.

Even though the Taiwanese government operates a self-sufficient and independent economy, does this make Taiwan completely independent of China?

Let’s find the answer to the question.

Is Taiwan part of China?

Taiwan is a country in East Asia officially known as the Republic of China (ROC). Taiwan is an island in the Taiwan Strait that is separated from mainland China.

The People’s Republic of China (PRC) constitution claims Taiwan province and territory as its own. For official purposes, the United Nations refers to the Taiwan area as “Taiwan, Province of China” by the PRC’s claim.

However, it is widely believed that only China and the government of the People’s Republic of China belong solely to China. Furthermore, China has adamantly refused that Taiwan is independent even though Taiwan now claims to be a sovereign state.

The relationship between the following two political entities, divided by the Taiwan Strait in the western Pacific Ocean, is Taiwan–China relations.

The relationship has been complicated due to the dispute over Taiwan’s political status after Japan’s administration was transferred to Taiwan at the end of World War II in 1945. Furthermore, this relationship became controversial because of the civil war when China was split into the two countries listed above in 1949.

However, when World War II ended in 1945, the government of Taiwan was transferred from the Empire of Japan to the Republic of China (ROC).

The political question begging to be answered whether the two entities are two independent countries (either “Taiwan” and “China” or “Republic of China” and “People’s Republic of China”) or two “regions” or sections of the same country (i.e., “One China”) with competing governments.

Another similar subject of debate is whether Taiwanese islands should remain a separate self-governing state but part of the ROC’s territory. Another option is merging with China to create a new alternative (federal) government with the mainland (such as the Federal Republic of China or the United States of China).

This argument also centers on whether the ROC’s and PRC’s existence and legal status as sovereign states are valid under international law.

This absurd relationship has resulted in geopolitical compromise—one of the problems being that Taiwan is not recognized as a country by the United States.

Currently, only 17 countries recognize Taiwan’s democratic government, known as the Republic of China. But, the United Nations does not identify Taiwan officially. The UN only recognizes Beijing’s People’s Republic of China government as speaking for the Island, even though Beijing has never controlled Taiwan.

Another ridiculous problem facing the Taiwanese government is that Taiwanese citizens cannot access UN headquarters with their passports. The Taiwanese passport, which has the Republic of China (Taiwan) logo, is among the most widely acknowledged documents on the earth. It allows its 23 million inhabitants to travel the world. Yet, they have limited access to the UN buildings.

Also, Taiwan Island constantly faces territorial threats from China. This compromise gradually degrades Taiwan’s sovereign status as they are being canceled out by companies who prefer to preserve their business access in the Chinese market.

For the past few decades, Taiwanese politics has been dominated by the topic of independence. This topic is a severe problem for mainland China as well. Former President Lee Teng-hui and the Taiwan Solidarity Union have made it official to establish a Taiwanese state.

The current leadership of the Republic of China (ROC) claims that Taiwan is already an independent country as the ROC and hence does not need to push for any official independence.

The use of Independence for Taiwan can be vague. If you say Taiwan is independent, you may be agreeing to the idea of formally establishing the independent Republic of Taiwan. You could also be implying that Taiwan is the same as the current Republic of China and is already self-governing.

In 1949–1950 during the Chinese Civil War, the Communist Party of China (CPC) forced the ROC government out of China, Taiwan, and Fujian Island.

There was no treaty in place at the time to legally cede Taiwan to China. In 1949, the ROC designated Taipei as China’s provisional capital and imposed “martial law.” During this time, Taiwan democratic institutions were; “temporarily” suspended.

With democracy in ROC-controlled Taiwan suspended, the Kuomintang of the Republic of China effectively turned Taiwan into a dictatorship. Thousands of Taiwanese and Chinese democracy advocates were wrongfully convicted and occasionally executed. This Taiwan’s martial law period (popularly known as “White terror”) lasted from 1949 to 1987.

During a terrible incident (Donggang Massacre) in March 1987, a citizen of the USA, Henry Liu, was assassinated by members of a criminal triad secretly trained by the Military Intelligence Bureau of the Republic of China. This massacre puts the Kuomintang under pressure to release his power and end martial law in Taiwan.

It is debatable whether Taiwan has already attained practical independence under the Republic of China’s modified Constitution of 2005. “However, there is still an ongoing argument between the PRC and the Kuomintang whether “The Chinese Civil War hasn’t yet finished.”

The Pan-Green Coalition in Taiwan, led by the Democratic Progressive Party (DPP), supports Taiwan’s independence, whereas the Pan-Blue Coalition, led by the Kuomintang, opposes it.

Taiwan’s Pan-Green coalition aspires to attain complete sovereign independence in the future. On the other hand, the latter alliance seeks to enhance relations with the Beijing leadership of mainland China (PRC).

Both parties have been forced to depend on uncertain premises around Taiwan’s political “status quo” for a long time. Due to pressure from the PRC and the KMT, the DPP is unable to proclaim independence soon. Likewise, the KMT and the PRC cannot accomplish Chinese unification quickly due to pressure from the DPP and its unofficial allies.

Taiwan’s independence and its connection with mainland China are complex and elicit strong emotions in Taiwanese citizens. Taiwanese citizens claim that Taiwan has always been and should remain entirely separate from China and become a Taiwanese state with a different name.

The movement for Taiwan’s independence has an ultimate goal. The goal is to create a country in which China is a foreign entity. In addition, Taiwan should be internationally recognized as a country utterly independent of China.

The Geography And Climate Of Taiwan

Taiwan’s geography is captivating and extraordinary.

It is one reason why the Taiwanese country is one of Asia’s most diversified travel destinations.

Taiwan is located in Eastern Asia, about the same size as Switzerland or Belgium. It is 120 km off the coast of China and 355 km north of the Philippines. The Island is 595 km southwest of Japan on the Tropic of Cancer,

Taiwan is quite a small island but extraordinarily mountainous. Rugged, densely forested mountains cover over 70% of the Island. The reasons for this are not far-fetched. The Island is situated where the Eurasian tectonic plate meets the Philippine Sea plate on its eastern side.

It is a tropical island with diverse and colorful terrain, including mountains, lakes and rivers, plains and basins, and three seas.

Taiwan is located in the world’s most volcanically active region, the Rim of Fire. Earthquakes occur frequently and can be felt – sometimes violently – anywhere on the Island. Earthquakes have a profound effect on Taiwan’s landscape.

Typhoon is derived from the Chinese word taifeng, which means “massive winds. It is the same thing as a hurricane in the United States or a cyclone in the United Kingdom: a powerful storm with heavy rain and strong winds.

“The summer months, from July to September, are when the majority of typhoons strike Taiwan. Every year, the Island experiences at least four to five typhoons.

Massive amounts of rain accompany this storm in a short period. These violent storms can produce winds of up to 250 km per hour or more. Landslides frequently cause boats to capsize, communities to flood, and buildings to collapse.

Interesting Facts About Taiwan You Probably Didn’t Know Before Now

The question “Is Taiwan part of China?” is a complex one that has elicited intense controversies in the past decades. The People’s Republic of China (PRC) leadership opposes the sovereign status of Taiwan because it believes Taiwan and mainland China are two parts of a single country’s territory.

However, it is essential to note that Taiwan’s strategic relevance to both the US and an increasingly aggressive China cannot be overstated despite its limited international recognition.